US software firm Qualtrics to create 100 jobs in Dublin 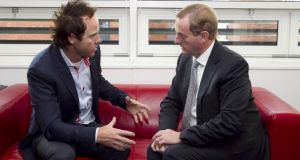 US software firm Qualtrics is to create 100 jobs at its Dublin base.

The new roles will take the number of people employed by the firm to 250 by the end of 2016, and exceeds the company’s original target of 150 employees within three years.

Founded by chief executive Ryan Smith and his father Scott in 2002, the Utah-based start-up has its European headquarters in Dublin, with the office opening in 2013.

The company provides a platform that allows businesses to collect data quickly and use it to test brand concepts, understand market feedback, and measure customer experience and satisfaction. It also manages employee feedback for companies.

Customers of the company include Fortune 100 companies and universities, with Kelloggs, HP, Cisco and Stanford University all using the service.

It has more than 7,000 clients in 75 countries, spanning sectors from retail to healthcare.

Speaking about the planned expansion, Mr Smith said the Irish base was important to firm as it grows its business in Europe, following “hugely positive” market response to its technology.

Qualtrics has been on a major expansion programme since it raised $150 million in venture capital funding last year.

At the time the company said it would use the funding to further develop its products and also expand overseas.

That included more jobs in Ireland, where the company currently employs just under 100 people.

Among its backers are Insight Venture Partners, who led the recent Series B funding round, and Silicon Valley investors Accel Partners and Sequoia Capital, who also took part in the previous $70 million fundraising round.

That put Qualtrics in the same sentence as Dropbox, Google and Whatsapp, some of the VC funds’ previous investments.

The company has also located offices in Seattle and Sydney, Australia.

Its chief executive has been named on Forbes’ list of most promising CEOs under 35.

Smith turned down half a billion dollars to sell the company in 2011; it’s now valued at more than $1 billion.