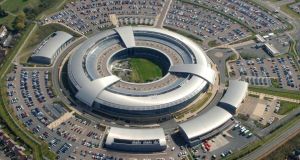 The documents detail a whole series of underwater cables – essentially the backbone that connects Ireland to the globe – that are being tapped.

A document titled “Partner Cables” list the cables that Britain’s Government Communications Headquarters (GCHQ) has accessed or sought to access. The commercial owners of the cables are identified by codenames.

The cables include the Solas undersea cable, which extends from the Wexford coast to southern Wales.

The owner of the cable is listed as “GERONTIC”, the password for Cable & Wireless, which is now part of Vodafone. The method of access is described as “DCO” or Direct Cable Ownership.

Eircom has a 50 per cent interest in the Solas cable and said last night “we have no knowledge of any activity of that nature”.

It is listed as a cable to which GCHQ does not “currently have good access”.

According to the documents, the only providers assisting GCHQ with access to the Hibernia cable are called “VITREOUS” and “LITTLE”. They provide what’s called IRU/LC or “Indefeasible Rights of Use/Lit Capacity” access. An Irish company linked to the VITREOUS codename last night denied involvement.

Other cables highlighted in a master list that may be targeted include: “BT-TE1”, a cable that lands in Holyhead in Wales and is co-owned by Eircom and BT. This cable has not been in use for more than 10 years, according to Eircom. BT declined to comment last night.

A cable called ESAT 1, which goes from Kilmore Quay in Wexford and lands at Sennen Cove in Cornwall, is on the list, as is ESAT2, another cable that runs from Sandymount in Dublin to Southport, north of Liverpool in the UK.

The German newspaper Süddeutsche Zeitung released the documents as part of its report on a new cache of documents from Mr Snowden.

It focused on how telecom firm Cable & Wireless, which was acquired by Vodafone in 2012, “played a key role in establishing one of the Government Communications Headquarters’ (GCHQ) most controversial surveillance programmes”.

Vodafone says it does not go beyond what is required under the law when responding to demands from any agency for access to customer data. Telecommunications companies can be legally compelled to co-operate with intelligence agencies in providing access to cables and also forbidden to disclose their involvement.

Snowden, a former employee of the US National Security Agency, has thousands of confidential documents about US covert surveillance in 2013.