Time is of the essence at Web Summit panels 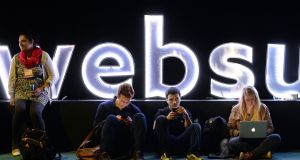 Taking a break at this year’s Web Summit. With extra time audiences get a much better sense of each contributor, discussions are more robust and finely developed, and individual contributions more nuanced. Photograph: Eric Luke

I always find the brevity of most of the Web Summit’s panel discussions frustrating. Just as an interesting collection of contributors get into a toothsome topic, it’s over.

Most panels are allotted just 20 minutes, which moderators are told will actually be about 18 minutes once the session is introduced. If a previous panel or talk dared go a minute or two over time, the discussion time could shrink to under 15 minutes.

But the Society Stage – the smallest of all the staging areas – does things differently. Panels are generally given 35 to 45 minutes, and the value of that extra time shows.

Audiences get a much better sense of each contributor, discussions are more robust and finely developed, and individual contributions more nuanced.

Led by TJ McIntyre, UCD law lecturer and chairman of Digital Rights Ireland, panellists debated whether Europe and its regulatory environment is conducive to the development of “unicorns” – companies valued at $1 billion or more.

Julian David of TechUK argued that while it can be easy to view the US as the big market, Europe – an even larger market – was a major factor in Britain’s success in the tech sector. Not what many might have expected as the opening gambit from a UK panellist, though he also voiced a concern that Europe still needs to shape up, and stop looking backward and acting protectively of its older industries.

David Galbraith of the Anthemis Group seemed to be the hardnosed capitalist of the group. Europe was well behind the current digital revolution and we were at a stage equivalent to the start of the automotive age, but without any car companies in Europe, he said.

Legal decisions such as the recent European Court of Justice ruling in the Max Schrems case, which eliminated the Safe Harbour principles that enabled data exchanges between EU and US companies, didn’t help. “It’s a form of protectionism,” he said, though he allowed that it was hard to know whether that would be good or bad.

Julia Bowles, a Cambridge academic and contributor to the Guardian, took a different view. “The way the internet has evolved involves a different kind of protectionism [of companies]. I think the Safe Harbour ruling was a triumph for fundamental rights,” but unfortunately gave no guidance on a practical response nor a transition period.

She dismissed “the rhetoric of a free speech internet”, saying that if a top court needed to step in, it signalled a worrying lack of industry and government transparency in the handling of data.

Returning to the theme of the session, Heather Brunner of WP Engine wondered if unicorn companies could or would form in such a regulatory environment. And Galbraith noted, “One person’s privacy is another person’s secrecy.”

Throughout, moderator McIntyre, a man of strong opinions, remained admirably neutral, allowing panellists to express opinions and legal interpretations I know he would not necessarily agree with.

One of the most interesting and unexpected comments came from Galbraith at the very end. San Francisco, he said, was stuffed full of technology companies – many of them unicorns and high profile established internet companies – worth a collective $2.5 trillion. Yet look on its streets, full of the homeless, and the city looks poorer than it ever has.

We cannot have a shiny new internet world full of companies that exist parallel to, yet separate from these abandoned, vulnerable people, he said, to applause.

I did not expect the discussion to end with such an observation from that panellist. In a shorter time, he likely never would have got there. It brought a nice close to a stimulating discussion and left the audience with plenty to think about.

1 How to budget your way through financial realities of Covid-19
2 Restaurateurs seeking deals on rent with many payments due this week
3 Insolvency lawyer warns of ‘disaster’ if firms reject Covid-19 wage subsidies
4 Penneys puts plan for new store in Dundrum Town Centre on hold
5 Irish economy to suffer mildest shock to output from Covid-19, OECD says
Real news has value SUBSCRIBE