Tesla buys 1,000 ventilators in China and ships them to US 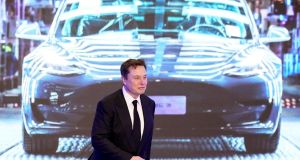 Tesla CEO Elon Musk walks next to a screen showing an image of Tesla Model 3 car.

Tesla’s purchase comes as governments across the globe appeal to automakers and aerospace companies help procure or make ventilators and other medical equipment.

“China had an oversupply, so we bought 1,255 FDA-approved ResMed, Philips and Medtronic ventilators on Friday night and airshipped them to LA,” Musk said on Twitter.

California governor Gavin Newsom on Tuesday said the state would receive 1,000 ventilators from Tesla as the United States braces to deal with an influx of patients infected by the coronavirus.

Authorities are hoping large-scale manufacturers can use their low-cost supply chains and digital design expertise, including 3D printing, and repurpose some factories in order to make up the expected shortfall in vital medical hardware.

Carmakers have cautioned that assembling delicate medical equipment to standards adequate for use in hospital intensive care units remains a challenge. – Reuters