Super-fast US to Europe internet cable due in Cork 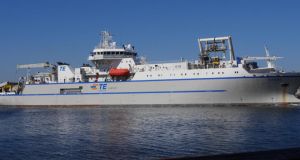 A super-fast internet cable, linking the US to Europe, is due to land in Cork early next month. The transatlantic subsea cable, called Project Express, will be the first modern fibre-optic cable connecting North America to Europe in more than 12 years.

Operated by global telecoms provider Hibernia Networks, the 4,600km cable will provide a super-fast internet connection for companies, promising the lowest latency route from New York to London with about 60 milliseconds round-trip delay.

Minister for Data Protection Dara Murphy said the cable “had the potential to attract major global business opportunities for Cork, positively impacting jobs and providing Cork with the lowest latency to USA and Europe which would be a unique selling point over other international regions”.

Doug Cunningham, chairman of the Ireland France Subsea Cable, said he was hopeful of connecting Ireland to mainland Europe, with a subsea fibre cable from Cork to Lannion in France. Currently all Irish internet traffic to Europe must cross the UK to reach the continent.

Mr Cunningham said the direct connection to Europe would enable higher-speed connectivity, lower latency and enhanced resiliency for data traffic to and from Europe and Eastern Europe.

Jerry Sweeney, chief executive of Cork Internet eXchange data centre, said the Hibernian Networks “express” connection, along with the Ireland-France cable, would mean that Cork would become a central global IP routing station with the US and Europe.

“This major connectivity infrastructure will undoubtedly attract a number of data centres and further position the Cork region ideally for foreign direct investment,” he said.

The region is already home to IT giants such as Apple, IBM and EMC, but Mr Sweeney believes the cables will help it attract more companies and data centres. “There are approximately 20 large data centres in Ireland,” he said. “They are all in Dublin. This is because all the fibre-optic connectivity coming into Ireland goes straight to Dublin.”

1 Ryanair and Eir the worst for customer service during Covid crisis
2 Fair deal? Family at odds with hospital and each other not so sure
3 ‘Essential’ retailers risk a firestorm if they exploit the closure of the ‘non-essential’
4 What to consider if older person or loved one needs care at home
5 PlanNet21 eyes further acquisitions after buying rival eCom
Real news has value SUBSCRIBE