Company was concluding funding round when approached by Sophos about deal 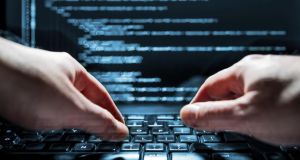 Barricade has developed an early-warning system that uses machine learning and artificial intelligence to identify attempts to breach server security.

IT security and data-protection firm Sophos has acquired the Cork-based cybersecurity start-up Barricade for an undisclosed sum.

Barricade was founded by tech entrepreneur David Coallier in November 2014. The firm has developed an early-warning system that uses machine learning and artificial intelligence to identify attempts to breach server security.

Mr Coallier was previously a co-founder of Orchestra, a platform for deploying, scaling and managing PHP applications that was sold to Engine Yard in August 2011. He also co-founded the mobile messaging platform Kwikdesk and was one of the initial investors in Intercom and Trustev.

Barricade raised €1.2 million in just six weeks early last year after completing a funding round that included venture capital firms such as Frontline Ventures and Tribal Ventures, as well as business angels including Lovin Dublin founder Niall Harbison. The company was in the process of trying to raise as much as $10 million prior to the acquisition.

Mr Coallier told The Irish Times the security-as-a-service firm was approached by Sophos and two other unnamed companies in the run-up to closing a new funding round. He stressed, however, that money was not his main motivation for selling Barricade.

“It was timely when we met Sophos because we were just about to close the round but, more importantly, our focus is to build better intelligent models eventually, so it was a case of either keeping raising more funds to grow ourselves, or to accelerate things and have the support of a really good network of channel partners and sales people,” he said.

Oxford-headquartered Sophos last year broke records with the largest initial public offering in the UK for a software company, valuing it at $1.6 billion (€1.4 billion). It has more than 100 million users across 140 countries

The company said it would maintain offices in Cork following the deal to acquire Barricade.

“We searched for a long time for the right company and looked at dozens of them. We really like Dave and what he has built with Barricade and were also excited about the idea of having a presence in Cork,” said Bill Lucchini, general manager and senior vice-president of the Sophos cloud security group.

Mr Lucchini said the acquisition of Barricade would advance its security analytics strategy.

“We are literally getting millions and millions of transactions of data points every minute of the day and Barricade’s technology and team can help draw additional, deeper insights into where threats might be in that data stream,” he said.