Should you charge your phone overnight?

If you hanker for a new device every two years, feel free to recharge as often as you like 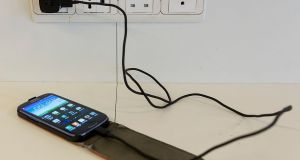 Frequent charging takes a toll on the lithium-ion batteries in our phones. Photograph: Getty Images

Chances are, you plug in your phone before you go to bed at night, thinking it’s best to greet the morning with a fully charged device.

Is this a good idea?

That depends. Here’s the thing. Many people don’t expect to keep their phones for much longer than two years.

For the most part, experts say, those people are not going to notice much damage to their phone batteries before they start hankering for a new device.

If that sounds like you, feel free to charge every night, and as often as you like in between.

But frequent charging takes a toll on the lithium-ion batteries in our phones. And it’s not because they can be overcharged, said Edo Campos, a spokesman for Anker, which produces phone chargers.

“Smartphones are, in fact, smart,” Campos said. “They know when to stop charging.”

Android phones and iPhones are equipped with chips that protect them from absorbing excess electrical current once they are fully charged.

So in theory, any damage from charging your phone overnight with an official charger, or a trustworthy off-brand charger, should be negligible.

But the act of charging is itself bad for your phone’s battery.

Most phones make use of a technology that allows their batteries to accept more current faster. Hatem Zeine, the founder, chief scientist and chief technical officer of wireless charging company Ossia, says the technology enables phones to adjust to the amount of charge that a charger is capable of supplying.

The technology allows power to pulse into the battery in specific modulations, increasing the speed at which the lithium ions in the battery travel from one side to the other and causing the battery to charge more quickly.

But this process also leads lithium-ion (and lithium-polymer) batteries to corrode faster than they otherwise would.

“When you charge fast all the time, you limit the life span of the battery,” Zeine said.

Is there a solution?

If you’re intent on preserving a lithium-ion battery beyond the lifetime of the typical phone or tablet, Zeine suggested using a charger meant for a less powerful device, though he couldn’t guarantee that it would work.

“For example, if you used an iPhone charger on an iPad Pro, it’s going to charge very slowly,” Zeine said. “If the electronics are right, they can actually preserve the battery because you’re always charging it slowly.”

People looking to preserve their batteries should make sure their phones don’t become overheated, Campos advised, because high temperatures further excite the lithium-ion in batteries, leading to even quicker deterioration.

Both Zeine and Campos noted that given the constant demand for new cellphones, charging overnight might not be a point of great concern for many people.

“All this actually doesn’t make a huge difference for consumers,” Campos said, citing a 2015 Gallup survey showing that 44 per cent of smartphone users planned to upgrade their devices as soon as their providers allowed it – usually after two years, about the length of time it takes for batteries to start showing signs of wear.

Britain’s new immigration regime will damage much more than industry

1 Britain’s new immigration regime will damage much more than industry
2 Google completes purchase of Treasury Building for €120m
3 Varadkar resigns amid warning impasse will hit the economy
4 Nineteen staff made redundant by Nama share €1m
5 How can I view my dead brother’s will if I’m not the executor?
Real news has value SUBSCRIBE