Chief operating officer has ruled out run for political office 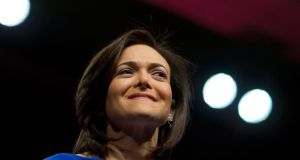 Sheryl Sandberg: has sold about 10 million shares worth some $400 million since Facebook made its stock-market debut in May 2012. Photograph: Erin Lubin/Bloomberg

The series of disposals, some of which were made to satisfy tax bills, are likely to add to persistent questions about whether Ms Sandberg is eyeing an eventual departure from the company for a future in government or as head of another large company.

However, her name has yet to be closely linked to any senior corporate positions and she has denied any plans to compete for political office – most recently in January, when she said that politics was “not for me”.

Also, even after the disposals, Ms Sandberg’s stake, worth about $1 billion (€0.72 billion), still makes her one of the largest individual investors in Facebook with a 0.5 per cent stake.

As chief operating officer, the former Google executive was brought in at a critical time in Facebook’s development, when the company was first looking to ramp up its revenues and a young Mark Zuckerberg was still trying to find his feet.

The Facebook chief executive has since developed a greater management self-assurance and taken on many of the company’s key decisions, for instance in his personal handling of deals such as the acquisitions of WhatsApp and Instagram.

Ms Sandberg has frequently been talked of as a candidate for high office in Washington.

A former chief of staff to Larry Summers when he was treasury secretary under Bill Clinton, she was said to have been considered for that position during the first Obama administration.

Ms Sandberg has sold about 10 million shares worth some $400 million since Facebook made its stock-market debut in May 2012, according to filings with the Securities and Exchange Commission.

The sales were made under the “blind” trading plans that corporate executives use to spread their disposals out over a period of time, reducing the risk of being accused of trading on privileged information.

She also sold nearly 16 million shares in late 2012 to settle a tax bill that fell due when restricted stock she had in the company vested to become ordinary shares.