Popular email service goes live as Gaeilge after over 60,000 terms are translated 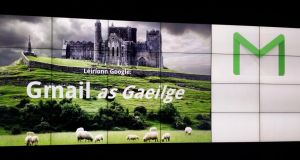 The new service was launched at an event at The Foundry, Google’s innovation centre, at the company’s EMEA headquarters in Dublin. 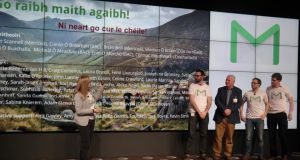 Users of Google’s email client, Gmail, can now use the service in Irish following an extensive translation project undertaken by localisation teams and volunteer translators across the world.

Familiar Gmail terms such as Inbox, Starred and Sent Mail will appear as Bosca Isteach, Le Réiltín and Seolta once a small change is made to the user settings.

Comedian and presenter Hector Ó hEochagáin showed students from Pobalscoil Ghaoth Dobhair, Coláiste Íosagáin, Gaelcholáiste an Phiarsaigh and Mount Temple how to switch their Gmail settings to Gaeilge at an event at The Foundry, Google’s innovation centre in Dublin on Thursday.

The project came about after Professor Kevin Scannell of the University of St Louis, Missouri, contacted Google with the idea of translating the email client currently used by over 425 million users across the world.

Over 60,000 terms and messages were translated into Irish by a team of eight translators bringing to 72 the number of supported languages in Gmail.

Google staff based in Dublin, Zurich and at the company’s Mountain View base in California spent the last two months testing the newly localised version before going live with Gmail as Gaeilge.

Citing Google’s mission “to organise the world’s information and make it universally accessible and useful”, the company’s Global Language Services Manager Ana Paez said her team’s goal was to translate Google products in a way that allows the company to be close to “what the community thinks is relevant and important”.

Laura Brassil, who works with the localisation team in Dublin, said she hoped the tool would be used by people regardless of their knowledge of Irish.

“I would hope that as well as being a useful tool for people who use Irish every day it will also prove useful for people who have forgotten their Irish - I have a colleague here who is German and is using Gmail as Gaeilge and (is) learning a few words of Irish herself,” she said.

“Professor Kevin Scannell came to us and said he had a group of translators. I put a group together - it was like a meitheal - we had a group here in Dublin, in Zurich and in Mountain View.”

Not only did the project make Gmail available in Irish but it also played its part in updating a database of languages used by other companies to inform their own software applications.

The Common Locale Data Repository (CLDR) is a collaborative database used to adapt software to the conventions of different languages by software giants including Apple, IBM and Microsoft as well as Google.

“Google updated the Irish data in CLDR which will improve Irish across the internet. English is very dominant but as more languages are coming online it is getting easier to use the Internet in different languages,” Ms Brassil said.

“I have great hope for it myself. I used to have very good Irish but I haven’t spoken it much since school so this has brought Irish back to me ‘tá sé ag teacht ar ais chugam,’ she added.

Several translators who worked on the project including Cormac Breathnach, Ciarán Ó Bréartún, Micheál Ó Meachair and Eoin Ó Murchú were present along with several members of the Google team.

John Lunney, Gmail engineer and member of a group of Irish speakers at Google said: “The idea is the most important thing. It is very good for people who are fluent but it especially good for those who do not have fluent Irish but who want to get back in touch with it again.”

To change your language in Gmail:

Click on the wheel on the top right of the Gmail screen. Select settings . At the top of the page, select Gaeilge from the drop-down menu in the language section. Click on save changes at the bottom of the screen.