Sean O’Sullivan: venture capitalist whose company is just as unorthodox as its founder

Poor New York boy makes good – and this rags-to-riches story takes in high school janitoring, a near-death helicopter experience, a personal tragedy in Bagdad, success with Netflix and missing the boat on Apple 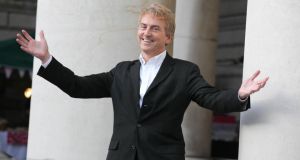 To say that Sean O’Sullivan has had a successful career would be an understatement. He pioneered street mapping on computers, is credited with coining the term “cloud computing” (along with George Favaloro of Compaq), and built up a company worth $200 million by the time he was 28.

O’Sullivan lives in Cork but spends much of his time travelling the world as the head of SOSVentures, investing about $50 million (€44.7 million) a year in start-ups. But his journey from school janitor to venture capitalist is a real-life rags-to-riches story.

Sitting in the Munich offices of EY, where O’Sullivan is visiting as part of a chief executive retreat (he is a finalist in this year’s EY Entrepreneur of the Year competition), I realise the investor is perhaps the most softly spoken person I have ever met. In fact, he is so softly spoken that it’s hard to believe he is a venture capitalist. It goes against the typical image of a hard-nosed shark.

But then O’Sullivan is no ordinary investor. He founded a rock band, obtained a master’s in film production and lived in Baghdad at the height of the Iraq war. Every night in bed he wears a headband, which reads his brainwaves and transmits the data to his alarm clock.

“I get in 5.5 hours of sleep what a normal man my age gets in eight hours,” he says. “When I wake up and see a sleep score that’s good, I know I’ve got the optimum amount of sleep. It also wakes me up at the perfect time.”

Not surprisingly, SOSVentures is no ordinary investment firm. The company runs world-leading accelerator programmes in Cork, New York, San Francisco and Shanghai and Shenzhen in China.

Poor is what he calls it

“I grew up in a disadvantaged background, poor is what we called it,” he says. “They had a thing called Ceta – Comprehensive Employment and Training Act. It’s supposed to be for training and to prepare the poor for higher functioning jobs”.

When the school year came around, he was given a job under Ceta as a janitor in his high school. He found it humiliating to think cleaning the school was seen as work “training”.

“I was embarrassed to be cleaning the school, where my classmates could see me with broom, vacuum and mop. A very classy girl who I had a crush on saw me working one day, cleaning out the fifth grade classroom.”

“Remarkably, both government offices agreed to allow me to perform manual labour in the data processing office, and I quickly advanced to start programming the computers for the county.”

O’Sullivan graduated from Rensselaer Polytechnic Institute in 1985 with a degree in electrical engineering, before going on to work as a computer programmer. A near-death experience while flying a helicopter was the catalyst to quit his job and set up his own business.

“There’s 127 items on the [helicopter takeoff] checklist,” he says. “I did 126. I didn’t turn back on the auto correlator. I was half way between Boston and Rhode Island when I went into rotor overspeed. The rotor was going too fast.”

Falling like a rock from a thousand feet before an emergency engine restart right above a Boston highway, he managed to recover at the last moment and land safely. The next day he quit his job.

“I dropped like a rock for 45 seconds,” he says. “I didn’t think I was going to survive. I thought it was sad I hadn’t done as much with my life as I wanted to. Clarity comes in near-death experiences. You ask what is the essential purpose of your life.

“I had built up a multimillion-dollar company at that stage and had a lot of personal wealth, but I didn’t feel like my work was done.”

He then co-founded MapInfo, which created the technology to allow people to type a street address into a computer and see it on a map. “I was co-founder and president for the first seven years, and led the company to being, if I recall, the 27th largest PC software company on the planet in its day.”

The entrepreneur also founded JumpStart International in Bagdad in 2003 to help Iraqis rebuild their homes and offices. The work involved clearing the debris of bombed-out buildings, constructing houses and restoring offices and warehouses.

Mohaymen Al Safar, a JumpStart co-founder and O’Sullivan’s best friend, was fatally shot in his car while they were in Iraq. Al Safar was due to be best man at O’Sullivan’s wedding.

“They killed Mohaymen yesterday,” O’Sullivan wrote just after his friend’s death. “Assassinated, if you prefer. Shot him in his car as he was on the way to look at new clearing and cleaning projects.

“What kind of cowardice and idiocy and inhumanity does it take to kill an unarmed humanitarian worker whose only crime was to be employing 3,000+ workers in helping to improve the country?”

On another occasion in Iraq, O’Sullivan was asked to pay the ransom for a kidnapped employee. He had to make the extremely difficult decision not to do so, as he had more than 3,000 people working for JumpStart at the time, and feared making them easy targets. The employee survived.

While O’Sullivan’s time in Baghdad wasn’t the best of memories, it was also the place where he met his wife, Irish-American journalist Tish Durkin.

“I put money in with professional money managers – Wall Street types,” he says. “I noticed they were wearing Rolex watches, driving fancy cars and charging high fees. I then noticed I was doing much better with my angel investments than my Wall Street funds.”

Over the years, he has invested in Harmonix (a developer of the music-based video games Guitar Hero and Rock Band), Apple and Netflix. If he’d held onto all his Apple shares, they’d probably be worth half a billion dollars or more by now.

“I put a lot of money into Netflix,” he says. “That worked out well. I got a 36 per cent internal rate of return. That put us into the top 3 per cent, maybe the top 1 per cent of VCs worldwide.”

Not all investments work out so well: “I lost $8 million (€7.1 million) in a telecoms company called Primus that went bankrupt. It happened quick after the financial crisis.”

After battling to hire technically skilled employees for programming and design engineering, O’Sullivan founded the Open Ireland initiative in 2012 to facilitate the entry of overseas tech talent.

“It was necessary for my company to survive in Ireland,” he says. “We were having to outsource work as we couldn’t get staff in Ireland, and we were having to turn down work too. It used to take six months or more to get a foreign tech worker into Ireland . . . now a job offer is a visa.”

“We are taking external financing for the first time,” O’Sullivan says. “That’s a different direction for us. It makes a ton of sense for us to do it.”

Among the things he has invested in through SOSVentures is an “electroloom” (a 3D printer that prints clothes) and Prynt (a battery pack that attaches to smartphones and prints Polaroid photos).

“When an idea appears to be absolutely preposterous,” he says, “that’s when we get involved.”

As for the future, O’Sullivan has no intention of leaving the world of venture capital any time soon – “I put SOS in SOSVentures as I didn’t want to create a job I’d work my way out of.” CV Name: Sean O’Sullivan Position: Managing director, SOSVentures

Education: Bachelor of science in electrical engineering from the Rensselaer Polytechnic Institute in Troy, New York; master of fine arts in film and television production from the University of Southern California.

Something about you that readers would expect: “I work at least 12 hours per day, six days a week. And I love it. The only way you’d stop me working is to bury me six feet underground.”

Something about you that would surprise readers: “I’m a helicopter pilot.”

Education: Bachelor of science in electrical engineering from the Rensselaer Polytechnic Institute in Troy, New York; master of fine arts in film and television production from the University of Southern California.

Something about you that readers would expect: “I work at least 12 hours per day, six days a week. And I love it. The only way you’d stop me working is to bury me six feet underground.”

Something about you that would surprise readers: “I’m a helicopter pilot.”

1 Eason acquires rival Dubray Books for undisclosed sum
2 Solar panels: Are they worth the investment?
3 Bank leaked my loan request to family who tried to rip me off
4 Ryanair and Aer Lingus monitor impact of coronavirus on travel to Italy
5 When the Chemistry no longer works – the closing of a leading Irish ad agency
Real news has value SUBSCRIBE