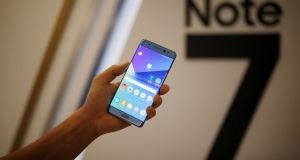 Samsung investors have swiped away concerns about its unprecedented recall of 2.5 million Note 7 phones – despite a forecast loss of more than 4 million unit sales, worth $5 billion in revenues or 5 per cent of annual net profit.

Shares in the group rose 0.5 per cent on Monday – the first day of trading after the recall was announced, following reports of exploding batteries.

However, while analysts said the relatively early identification of the problem should contain the cost, the longer-term reputational damage for Samsung appears harder to gauge.

As shareholders absorbed the details of the recall, which covers all models of Note 7 smartphone globally, analysts pointed out that the financial impact was manageable for the cash-rich company.

Implementing the process will cost $1 billion, they estimated, but the company has net cash of $59 billion.

“Samsung has contained the damage well, although some said the company was going out of its way to replace the faulty phones with new ones,” said Daniel Kim at Macquarie. “I think the battery problem will be a one-off issue.”

Its timing is likely to increase the total cost, though, as the two weeks needed to manufacture replacement products could deny Samsung an early-mover advantage over Apple’s rival iPhone 7, which will be launched on Wednesday.

It may also provide an opportunity for Chinese rivals to gain market shares. Samsung declined to confirm the costs involved.