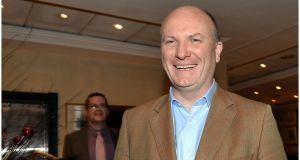 A consortium led by Declan Ganley’s Rivada Networks is in a two-horse race for a public contract to build a $7 billion new mobile phone network in Mexico. (Photograph: Brenda Fitzsimons / IRISH TIMES)

A consortium led by Declan Ganley’s Rivada Networks is in a two-horse race for a public contract to build a $7 billion new mobile phone network in Mexico.

The Mexican government wants a private company that is not allied with any of its existing operators to build a new 4G wholesale network, which will be open to all mobile operators.

It is part of a strategy, known as Red Compartida (shared network) to curb the market influence of Mexican billionaire Carlos Slim, whose America Movil controls 70 per cent of the mobile sector in the Latin American country.

“Rivada Networks has submitted a bid to build out Red Compartida for Mexico,” Mr Ganley’s company confirmed in a statement to The Irish Times.

“The Red Compartida filings are confidential so we will not comment in detail on our proposal but, if selected, Rivada’s proposal will help lift Mexican GDP and better the lives of citizens of all income groups in Mexico.”

Mr Ganley later tweeted that he believed his company’s bid was a “superb plan” that would bring “highly affordable, high-speed access” to Mexicans of all income groups.

“The beauty is it is pure wholesale. No incumbent has any influence, all have access [and there are] no inside deals,” said Mr Ganley.

Whoever wins the Red Compartida project will build out the network under a public-private partnership deal that is scheduled to last up to 20 years.

The winning tender must provide at least 85 per cent of the population with a high-speed 4G network. Mexico has a population of about 120 million people.

The winner must install about 12,000 telecoms towers to build out the network, and in return will be provided by the Mexican state with the use of a cheap tranche of high quality spectrum.

The Red Compartida plan has been beset by delays, but it is expected the tender could move swiftly towards a conclusion, with an announcement expected as early as November.

The tender was formally announced in January, although the plan was first mooted two years ago. It is likely to be the largest infrastructural project overseen by the administration of Mexican president, Enrique Peña Nieto.

The policy is part of a suite of measures designed to rein in the influence of Mr Slim who, with a fortune of $50 billion, is among the richest men in the world. Local reports say Mexicans have long complained about high prices and sometimes poor coverage and service on their mobile services.

Mr Slim’s companies are elsewhere competitors of Digicel, owned by Denis O’Brien, with whom Mr Ganley has also locked horns in the past.