Podcasting finally gets a hearing

Success of US podcast ‘Serial’ breathed new life into the niche, web-based medium 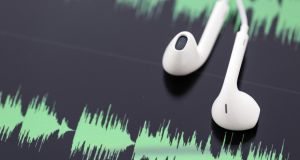 People talk about the Serial podcast the way they talk about Netflix’s House of Cards. It is clever, absorbing, entertaining and addictive. Not only does it shine a light on the human condition but it allows for binge consumption.

Serial is a 12-episode podcast in which journalist Sarah Koenig investigates the circumstances behind the case of a murdered teen in Baltimore in 1999 and the possibly wrongful incarceration of her boyfriend. Week by week it pulled in a growing audience until it became the most downloaded podcast ever on iTunes.

Although the audio podcast has been around for well over a decade it pretty much trundled along, happy to reside in the long tail, or niches, of online entertainment while Goliaths such as Netflix zoomed past. It came as somewhat of a surprise when it all blew up post-Serial.

Jeffrey Cranor is a co-founder of the spooky Twin Peaks-esque podcast drama series Welcome to Night Vale that recently toured Europe. He says: “Serial was the rising tide to raise all boats. Podcasting is a well-developed form of web content but this brought it to a wider audience.”

“It was great. What happened was you had Time magazine running articles along the lines of ‘Now that Serial is over, here’s a bunch of other podcasts you should listen to’.”

“Personally, it was great for us because after it came out I found that I had to explain less to people what it is I do for a living. The shorthand for podcasting is that you can say it’s like pre-recorded radio for the internet but [when you try to explain] people’s brains shut down right away. After Serial they got it,” he points out.

Although Night Vale is relatively new, it has become the main source of income for Cranor and his co-founder Joseph Fink. Cranor has been able to take his background in writing for theatre and transfer it to a medium that travels around the world.

Meanwhile in Ireland the podcasting space is very different. Between the veteran podcasters I talked to and a younger generation who are just getting in on the act, the general consensus is that the podcast is a passion project and there is no money to be made. It’s a labour of love and if other people also love it, that’s good too but that’s it.

Peter Donegan runs a landscaping and gardening business and has been podcasting for the past six years. Alongside the Arsecast (it’s not what you think; it’s all about Arsenal and footie), the Sodshow is one of Ireland’s longest-running podcasts.

While he acknowledges that there is no financial gain, the idea was to cater to a specific audience. After a little market research he found there were no Irish gardening podcasts or even any dedicated radio shows on the subject.

“There still aren’t any dedicated horticultural radio shows here. Meanwhile in Britain, BBC’s Gardener’s Question Time has been running since 1947,” he says. This seems to be a big driver for many podcasters – catering to an audience underserved, or not served at all, by mainstream entertainment.

While Donegan dives deep into gardening and the great outdoors, seasoned podcaster Brian Greene produces the show alongside him. He says podcasting has changed for the better: “There’s a much broader breadth of content choice now and the quality has improved a lot since the early days when it was quite amateur.”

“At the very beginning, around 2004, there was quite a lot of wannabe radio stars in their bedrooms, aping their idols, and then it waned a bit because that promise of commercialisation never materialised.”

In the interim, websites became less dominant as places to get content, social media took over and the process of recording, uploading and sharing a podcast became easier by several orders of magnitude. Now streaming audio on SoundCloud is considered a podcast as much as the iTunes-delivered ones.

These changes have made it easy for anyone to put out a podcast, which truly makes it ideal for niche interests: “Solicitors who like Liverpool FC can have a podcast for solicitors who like Liverpool FC. I jest not; there are such niches that exist. A small community of 500 people is enough to make it viable for the amateur or pro-amateur to exist.”

Greene doesn’t necessarily think that Serial was the driving force behind the podcast resurgence nor does he think that it will attract the advertising dollar into this space.

“Unfortunately the engaged listener who seeks out and downloads your podcast, investing 45 minutes of their time listening to you, doesn’t get valued as equally as someone sitting in their car during rush-hour happening to hear Larry Gogan in the background.”

The upturn in podcasting, in other words, is no gold rush.

Conn Ó Muíneacháin hosts a tech news podcast on Technology.ie but is also an award-winning radio producer; a man with his feet firmly planted on both sides of this divide. His take on the podcast is that it isn’t a threat to radio so much as a way of injecting new life into the medium.

“You only have to listen to stations like Newstalk and RTÉ inviting people to download their programmes and listen back. It’s also interesting how regional stations use online with their live programming, referring the listener to the website,” he says.

If you check out the chart-topping podcasts on whatever app you use to subscribe, you will find that they are downloadable or streaming versions of radio programmes.

“I don’t think there’s any particular virtue in the homespun, homemade amateurish feel to things. I don’t think it’s attractive to listeners in any medium. I don’t distinguish much between one or the other: good professional podcasts are like good radio shows and what people like in one is what they’ll like in the other,” says Ó Muíneacháin.

However, beyond the professionally-produced storytelling of Night Vale and Serial, and the radio magazine-style shows Ó Muíneacháin mentions, there is the hugely popular genre of rough and ready conversational podcasting that has its roots in shows created by people such as actor/producer Kevin Smith (of Clerks fame) and his buddies.

Thirty-something Wayne Talbot cites Smith as an influence for his podcast The Pubcast. Founded in 2010 with his friend Simon Fitzgerald, the goal for Talbot and his co-hosts Darren Fahey and Ciaran Marcantonio is to have fun talking about “all things geek”.

That’s reflected in the style of the show: each month they sit in a pub, drinks pints, and discuss the latest video game, movie or comic books. Over the clinking of glasses and background chatter, it feels as though you’re sitting down with friends.

“When we first started we were listening to Kevin Smith’s Smodcast quite a lot. He now has an entire empire built around a plethora of podcasts. We drew inspiration from this as well as GeekPlanetOnline, a website that now hosts our show alongside other niche podcasts.”

The laid-back manner and the fact that it’s recorded on an iPhone belies the fact that the Pubcast is a popular, long running podcast with a loyal audience. The hosts make regular appearances at various cons, or science-fiction and fantasy-themed conventions but there’s no sign of them wanting to monetise this like Night Vale’s creators have.

“Anyway,” he adds, “there’s a bit of an Irish mentality around monetising something that’s seen as amateur content along the lines of ‘sure, who’d pay to listen to this?’. I think any Irish podcast that started charging for ad space would only do it to cover costs.”

Despite the lack of money to be made, or perhaps because it is not commercialised in the way that most other web content is, podcasting is here to stay. As Night Vale creator Cranor says, it is the right mix of old and new. “It’s an old medium like radio and storytelling but it’s also brand new in that you can do anything with it.”