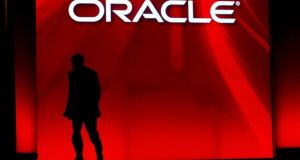 Larry Ellison, co-founder and leader of Oracle for 37 years, stepped aside as chief executive officer late yesterday, to be replaced by co-chief executives Safra Catz and Mark Hurd, raising questions about a job-sharing arrangement that has had a fraught record elsewhere.

Mr Ellison and the two new co-chief executives each stressed that nothing would change under the new management structure, with Mr Ellison staying on as executive chairman and chief technology officer.

But Oracle shares fell 2 per cent to $40.70 in after-hours trading after it reported the management shake-up and that profit had fallen below Wall Street’s average forecast, hurt by weak hardware sales.

The move immediately attracted criticism from management experts. “In almost all cases, these co-chief executive configurations are a jerry-rigged solution to a political problem,” said Jeffrey Sonnenfeld, a professor at Yale School of Management. The move comes earlier than expected by many investors, and appears designed to address concerns about the company’s direction under Mr Ellison (70), who co-founded the database company that became Oracle in 1977 and has been Oracle’s only chief executive.

Ms Catz and Mr Hurd echoed that mantra on the call. “I want to make sure we are very, very clear. There will actually be no changes,” said Ms Catz. “No changes whatsoever.”

For his part, Mr Hurd stressed that Oracle was not hierarchical. “We’re pretty flat in terms of the way we run the place, and we want to keep it that way,” he told the conference call. The creation of two CEO roles, which has largely been unsuccessful when tried at other companies, raises questions of how Ms Catz and Mr Hurd, both strong personalities, will work together at the top. “Co-CEO structures are typically not ideal,” said Bill Kreher, an analyst at Edward Jones. “They’re both very independent thinkers who have strong wills. At times they won’t agree. But they have worked closely together, and with Mr Ellison. We don’t see the day-to-day changing.”

The two have very different histories. Ms Catz, trained in finance and law, was a Wall Street banker from 1986 until she joined Oracle in 1999, and has been a central figure in Oracle’s many acquisitions. Sales-oriented Mr Hurd spent 25 years at computer and ATM pioneer NCR Corp before joining Hewlett-Packard, where he was CEO from 2005 until 2010, when he resigned in the wake of sexual harassment claims by a female contractor.

HP concluded that its harassment policy had not been violated but that Hurd had made inaccurate expense claims concealing entertainment for the contractor. He was courted by Mr Ellison and joined Oracle later that year.

1 Am I crazy to consider switching to an Ulster Bank mortgage?
2 How long can Government afford to keep State pension age at 66?
3 PTSB plays down Ulster Bank talk as it sells €1.4bn of loans
4 How much state pension will I get next year?
5 Housing crisis here to stay in absence of big rethink, industry warns
Real news has value SUBSCRIBE