Online fashion magazine Prowlster aims to do it in style 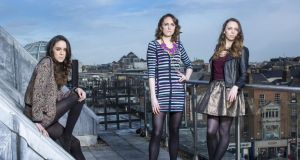 Cyndi Lauper said that girls just wanna have fun, but there’s a good dose of hard work thrown in for the founders of Irish online magazine Prowlster , which blends editorial content with shopping online.

Prowlster is the creation of the three McGinn sisters – Jennie (29), Sarah (27) and Grace (22) – from Naas, Co Kildare. The sisters ran the well-regarded fashion blog What Will I Wear Today f or four years prior to setting up Prowlster. “Not to sound too much like the Brady Bunch, but we all get on very well together so the blog was a way for us to engage together on a creative project from the different locations we were living in at the time,” says Jennie. Together the sisters and a network of contributors made the blog a well-known addition to Ireland’s fashion blogosphere and gave them exposure in mainstream media and as brand ambassadors for Diet Coke and fashion labels Vero Moda and Only jeans. It was time to take the venture further – to examine ways in which they could move into a more serious commercial space.

Last year the McGinns were competitively selected to take part in the National Digital Research Centre’s (NDRC) LaunchPad accelerator programme in which the country’s most exciting digital start-ups receive office space, mentoring and pre-seed investment. The McGinns developed their idea of a shoppable online magazine fusing e-commerce with editorial content and social media. Prowlster was awarded a Digital Marketing Award by the Irish Internet Association.


Crowd curation
Grace is the youngest sister currently working on the project, though one imagines little sister and Coder Dojo student Anna and journalism student Lorna may be hot on her heels. Her calm demeanour hints to a firm grip on proceedings for such a young woman. “Crowd curation or social curation is what we are about at Prowlster,” she says. “There’s too much information on the web and no relationship between the buyer and online shops, so we want to create an environment whereby the buyer can talk about the brands featured and feels like they are buying with someone rather than on their own.”

Through the LaunchPad Accelerator Programme, Prowlster trialled successfully as a pop-up magazine and online store in Open Beta for the four weeks prior to Christmas. With 12 retailers then stocked on the site, the women say they built strong traction and a “highly engaged community” of users. The average sale conversion (the number of people who ultimately made a purchase on the site) was 3.4 per cent (industry norms are 1 per cent).

Proving,” says Jennie, “at people are more likely to make a purchase if a) they see the item in a piece of desirable editorial content, and b) if their friends are talking about it.” The site is now fully functional but will see a redesign in the coming days.

“We are not an anonymous entity so we have a lot of support from our readers, retailers and contributors who have cottoned on straight away to what we are doing,” says Sarah.


Social commerce
The Prowlster women say that the site positions itself in the burgeoning space of social commerce. Platforms such as Twitter, Facebook and Pinterest are essential to the Prowlster model as they enable the idea of “crowd curation” or the building of a social space around online shopping.

The ambition for Prowlster is ultimately to offer a curated version of the website to each user based on their likes, preferences, shares on social platforms and previous purchases to eliminate any irrelevant and distracting editorial or shopping offers –essentially doing the job of net weeding.

Prowlster currently stocks mostly Irish brands such as Emma Manley and Project A Apparel. There are approximately two brands coming on board each week and the focus is not just on clothing, with stationery brands such as Doodle Moose and Joy McGovern and jewellery brands such as Merle O’Grady, De Loup and Kayleigh Forsythe. They say it’s about “featuring emerging design talent”.

Working with family can be notoriously difficult but it can also bring benefits, as the sisters know each other inside out and say that they can “extrapolate the professional from the personal”. They currently employ three people on a part-time basis in the roles of digital editor, marketing and retail acquisition and features editor, which helps add balance to the family dynamic. Ultimately though, these three sisters are doing it for themselves with plans for rapid fundraising and rapid expansion to take Prowlster global.