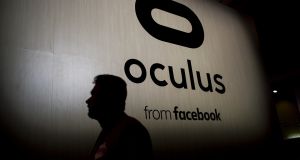 Oculus’s acquisition of InfiniLED has been described as an opportunity for Ireland to increase global awareness of its high-end technology and research ability. Photograph: Bloomberg

It will allow for Irish-developed LED (light emitting diode) technology to be applied to virtual-reality devices.

InfiniLED is an offshoot of the Tyndall National Institute (TNI). The value of the deal has not been revealed.

Oculus VR was itself acquired by Facebook in 2014 for $2 billion and is probably best known for the Oculus Rift, which provides next-generation virtual-reality solutions for gaming, immersive movies and educational experiences.

The deal has been described as an opportunity for Ireland to increase global awareness of its high-end technology and research ability.

The company was founded in 2010 and develops low-power display technology known as the ILED Display. It outperforms widely available standard display technologies, resulting in significant reductions in power use.

It is based on a breakthrough by Tyndall researcher Brian Corbett which was later commercialised when spun out in 2011 from TNI at University College Cork.

The underlying technology was invented by a team of researchers led by Mr Corbett at TNI with the support and funding of Enterprise Ireland.

“It is exciting to see that Oculus, a vibrant and leading-edge company, appreciates both the technology and the strength of the ecosystem that the InfiniLED team sits in,” said Tyndall chief executive Dr Kieran Drain.

“A key impact of this acquisition will be to increase global awareness that Ireland has technology and research of this calibre, and we anticipate further interactions with companies looking to merge hardware and software in efficient solutions, particularly for new devices that advance consumer electronics and the industrial internet.”

1 How long can Government afford to keep State pension age at 66?
2 Policy failed us during the banking crisis and it’s failing us again
3 Aryzta to pursue asset sales as takeover talks fail
4 Irish start-up Wayflyer raises €7.8m in seed funding
5 In praise of Gogglebox Ireland, an essential service in all but name
Real news has value SUBSCRIBE