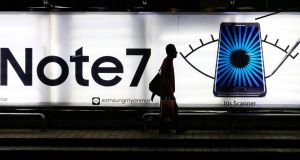 Samsung said it planned to make up for lost revenue by expanding sales of flagship models such as the Galaxy S7 and Galaxy S7 Edge.

The financial burden of Samsung’s Note 7 crisis is becoming clearer, as South Korea’s largest company tallies the cost of recalling and terminating production of the fire-prone smartphone.

The Suwon-based company disclosed on Friday a negative impact of about mid-three trillion won (€2.8 billion) on operating profit to the end of March 2017, on top of an already announced €2 billion cut for the preceding period.

The total of €4.8 billion is in line with analysts’ estimates. Chung Chang-Won at Nomura Holdings had estimated that the Note 7 termination would cost the company about €4.5 billion in operating profit through 2017.

Investors appear to have factored in an impact of that magnitude, and Samsung shares rose 1.3 per cent to 1.577 million won at the close in Seoul.

“Samsung just has to bear it,” said Yoo Jong-Woo, an analyst at Korea Investment and Securities.

In addition to the announcements, the company had already reported lower-than-projected profit from the mobile division in the prior quarter, partly reflecting the impact of the first few weeks of the Note 7 recall.

With that factored in, the “costs for the Note 7 crisis totals about seven trillion won, and that means Samsung has lost about one quarter of income,” Yoo said.

Samsung shares have slumped more than 8 per cent this week, wiping about $20 billion from its market value.

That has also attracted investors who are betting that the company is moving quickly enough to deal with the debacle and that it offers long-term value.

The company said it planned to make up for lost revenue by expanding sales of flagship models such as the Galaxy S7 and Galaxy S7 Edge.

Samsung has been struggling with the fallout from the troubled Note 7 phones, which were overheating and catching fire even after a recall that was supposed to fix the problem.

Samsung said on Tuesday it would kill this generation of the high-end phone. – (Bloomberg)