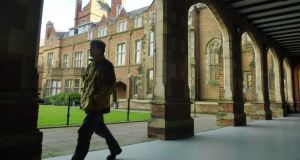 A Belfast-based start-up which has developed cyber-intelligence monitoring software has won a breakthrough contract with the US government.

Details of what exactly RepKnight – whose web applications analyse social media data – will be doing to earn its £1.7 million fee from the US government are understandably sketchy.

But the fact that newcomer RepKnight, which is just four years in business, not only managed to attract the attention of certain US government agencies but came away with a reputation-enhancing deal speaks volumes about how it is perceived in the market.

According to RepKnight its software allows security and intelligence organisations to not only monitor social media but also alerts them to “spikes in the data volumes” while pinpointing the geographic locations of the commentary.

If it all sounds a little too James Bond-ish then the reality is probably scarier because the Belfast company claims its open source data-monitoring platform also enables government and commercial analysts to identify threats, emerging events and “provides an immediate world-view or hyper-local view of public opinion on key issues”.

Given current world events it is not hard to see why the US government and indeed other governments closer to home and across the globe are increasingly interested in what RepKnight has to offer.

The Belfast company will be hoping that more American contracts could be in the pipeline following a recent high-profile visit to the US.

The Northern Ireland firm was chosen as one of just 12 UK cyber-security firms to participate in a trade mission led by British Prime Minister David Cameron to the US this month.

The company’s founder and chief executive John Reid, who met with government and industry leaders in Washington DC during the trade mission, believes the US market represents a great opportunity for the Belfast company.

“We, at RepKnight, pride ourselves on innovation and strive to stay at the cutting edge of cyber-intelligence technologies,” Reid says.

It has estimated to have helped attract more than 100 new investors and inspire new start-up companies to locate in the North and create 2,000 jobs locally.

Between them they hope to create nearly 250 jobs.

According to Prof John McCanny, the principal investigator at CSIT, the global cyber-security market is estimated to be worth more than $60 billion –if innovations developed by CSIT could harness just a slice of that, imagine what it could mean for the Northern Ireland economy.