Netflix plans to raise prices as US streaming subscribers grow 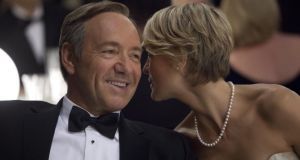 Netflix has invested in original series such as the critically acclaimed House of Cards, above, in order to attract and keep subscribers.

Online streaming service Netflix said it intends to raise its subscription price for new customers by $1 or $2 a month to help the company buy more movies and TV shows and improve service for its 48 million global subscribers.

Investors welcomed the announcement by Netflix, which had suffered from a consumer exodus and stock plunge after it announced an unpopular price increase in July 2011. The company’s shares jumped 6.7 per cent in after-hours trading to $371.97, after the company released plans for price hikes and posted a rise in first-quarter profit that beat Wall Street expectations.

With added revenue from higher prices, “we will be able to license much more content and deliver it in very high quality video,” Mr Hastings said on a webcast.

The company, in a quarterly letter to shareholders, said it plans to impose “a one or two dollar increase, depending on the country, later this quarter for new members only.”

Subscription fees will rise in each of the 41 countries where Netflix operates, Mr Hastings said in an interview. Existing customers will keep their current price for one to two years, he said.

The company said in its earnings report it added 2.25 million customers to its US streaming business during the quarter that ended in March, in line with the company’s earlier guidance, for a total of 35.7 million. In international markets, its customer base reached 12.7 million, a gain of 1.8 million during the quarter.

Net income for the quarter reached $53 million, an increase from $3 million a year earlier. Earnings-per-share came in at 86 cents.

During the quarter, it released the second season of critically acclaimed Kevin Spacey drama House of Cards.

Netflix is investing in original series, such as House of Cards and Orange is the New Black to attract and keep subscribers. If faces competition from online video players like Amazon. com, as well as on-demand content from cable operators.

“Comcast is already dominant enough to be able to capture unprecedented fees from transit providers and services such as Netflix,” the company said in its letter. “The combined company would possess even more anti-competitive leverage to charge arbitrary interconnection tolls for access to their customers.”

Netflix said those fees had improved Netflix service for Comcast customers, but singled out AT&T’s fibre-based U-Verse as providing “lower performance” than many other providers.

Comcast responded in a statement that the Netflix opposition to the planned merger was “based on inaccurate claims and arguments.” “There has been no company that has had a stronger commitment to openness of the Internet than Comcast,” the company said.