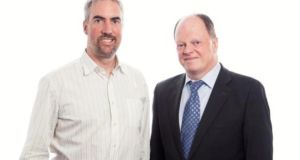 Sean Mitchell and David Moloney, founders of Movidius. The company has announced the second generation of its chip which it claims has twenty times more efficient than its predecessor.

Movidius, the Irish-backed mobile vision technology firm, has announced the second generation of its chip which it claims has twenty times more efficient than its predecessor.

In February Movidius said it had teamed up with Google to bring visual awareness to the next generation of Android-based smart phones in the search giant’s Project Tango.

The Dublin, California and Romania based company said its new chip could be used by Google as well as other large technology companies.

Co-founder David Moloney said: “This sets a benchmark for the industry. It delivers phenomenal performance at a power level that makes it usable.”

“The next disruption in mobile will be about incorporating vision applications into connected devices bringing them closer to the complexity and sophistication of human vision,” he added.

Movidius said the Myriad 2 was a 28-nanometer chip and was capable of performance exceeding two trillion 16-bit operations a second while using only a tiny amount of power.

In July, Movidius raised $16 million (€12.3 million) in a funding round led by DFJ Esprit, Atlantic Bridge and Robert Bosch Venture Capital, a German fund, as it geared up to launch its new technology and grow its business in the United States.

Movidius has been nominated as a finalist in the emerging category in the EY Entrepreneur of the Year awards this year.