Microsoft to donate €10m in technology support to Irish non-profits 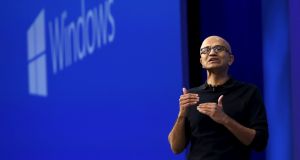 Microsoft is set to donate more than €10 million in technology support to charities and non-profit organisations in Ireland over the next two years.

The initiative is intended to help the groups use technology to transform the way they deliver their services. It’s part of a three-year scheme announced earlier this year that will see Microsoft Philanthropies donate $1 billion of Microsoft Cloud Services to serve non-profits and university researchers over the next three years.

Microsoft Ireland has already donated €8 million in support to groups, with ISPCC, Enable Ireland, Concern, Jack & Jill and Irish Water Safety all benefitting from the donation.

Microsoft is holding a special Tech4Good event at Smock Alley Theatre in Dublin on Thursday to highlight how charities and non-profits can use technology effectively. The event will include speakers from charities that have been helped by Microsoft’s programme, with Rick O’Shea as MC and athlete and adventurer Mark Pollock also speaking.

“We recognise that charities are playing a pivotal role in supporting and helping some of the most vulnerable people in society. Technology is, in many ways, a charity’s ideal partner - allowing the organisation to run services in previously unimaginable ways and enabling them to do more with limited resources,” said Orla Hogan, Head of Philanthropy and Corporate Communications, Microsoft Ireland. “Today is about showcasing what is possible when charities and the tech sector work together to deliver transformational change. Microsoft’s cloud-based technology can enable charities to work more fluidly day-to-day, freeing up time and resources to focus on making an even bigger social impact.”

Microsoft’s involvement with non-profits is a global scheme.