Company acquired Imagine Communications in 2015, and says it is ‘ebitda-positive’ 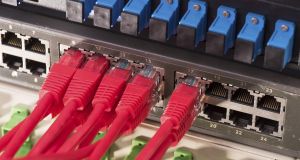 Magnet Networks, the Irish telecoms provider which acquired the retail business of rival Imagine Communications in a €16 million all-cash deal earlier this year, has reported a €4 million loss for 2015.

Magnet, which is owned by the Irish-American entrepreneur Ken Peterson, said despite the loss the company continued to trade on an “ebitda-positive basis” and expected to continue to do so this year.

The deal to acquire the retail business of Imagine in April made Magnet the third-largest business telecoms provider in the country with 11,000 SME and corporate customers.

“The Irish telecoms market remained a very tough competitive environment in 2015; however, in line with the broader economy being experienced we did see a halt in the decline in market size, the first such positive trend reversal in over five years,” the company said.

The group said at the end of last year its network reach in Ireland comprised of 40 unbundled Eir exchanges, and 32 fibre-to-the-home residential housing developments in Dublin, and counties Laois and Meath.

Magnet, which employs 66 people, said the business-to-business market remains the key growth focus area for the company in Ireland, offering stronger margins and lower churn than the residential market.

The accounts show Magnet has a potential deferred tax asset of €11.9 million as a result of trading losses incurred to date. It said this asset “has not been recognised as it is uncertain when the company will generate sufficient trading profits to utilise the losses forward”.

Established in 2004, Magnet, which is owned by Columbia Ventures Corporation, has invested in excess of €120 million in developing its telecoms network.