‘Lurkers are the most important people on social media’ 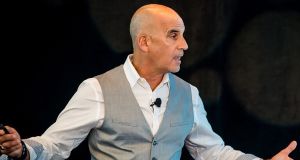 Ted Rubin, who is an internationally renowned social media strategist and number 3 on the Forbes list of Top 50 Social Media Power Influencers, is the keynote speaker at the Social Media Summit which begins in Dublin tomorrow.

Lurkers – those who don’t add anything to conversation – are probably the most important people on social media, according to Ted Rubin.

Mr Rubin, who is an internationally renowned social media strategist and number 3 on the Forbes list of Top 50 Social Media Power Influencers, is the keynote speaker at the Social Media Summit which begins in Dublin tomorrow.

He says most people are lurkers, who consume content but don’t respond.

“It’s the same in real life. Most people at parties, or in stores, are lurkers who are listening to things.”

He says lurkers are important, as they listen and then tell others what they hear.

Mr Rubin says social media has made people lazy communicators, wherby content is pushed out and broadcast to the masses.

“Often, we don’t even know or care who we are talking to, such as on Twitter.”

He says conversation is the best content, and people need to start being prepared when communicating with people digitally.

“Face to face we use a person’s name a lot, and we will repeat something they say back to them. We tend to forget to do this digitally. “

Richard Corbridge, chief information officer at the Health Service Executive, and RazorSocial founder Ian Cleary are among the other speakers at the Social Media Summit.

Samantha Kelly, Social Media Summit director and co-founder, said social media is a valuable tool for engaging and enriching lives, through communicating and sharing knowledge with lots of people and very fast in ways that wasn’t possible only a short time ago.

“The Social Media Summit has been created to help Irish companies to engage more and show them how to use the latest platforms and tools available to them.”

Conference organisers are hoping the event can replace the Web Summit, growing like it did, can and strengthening Dublin’s global brand for Innovation and technology leadership.

1 Brother is dragging his heels as executor of uncle’s will - is there anything I can do?
2 Apple tax case: Four individual lawyers paid over €500,000 each
3 Thailand attempts to lure travellers with luxurious lockdown options
4 Should my mam wait for house prices to drop before buying?
5 Irish whiskey sales near milestone of 12m cases a year
Real news has value SUBSCRIBE