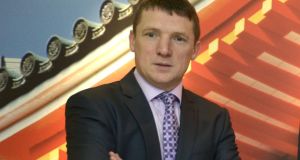 AMCS was founded by Jimmy Martin (left), and Austin Ryan and will employ 180 people after the deal, including 50 staff at PCST.

Limerick-based AMCS Group has acquired a company in the US, making it the world’s largest waste management software company.

AMCS has bought PC Scale Technologies (PCST), based in Pennsylvania, for an undisclosed sum, adding $10 million (€7.3 million) to its turnover. PCST employs 50 people in North America.

The acquisition comes after the company closed a €23.5 million fundraising round led by Highland Capital Partners (Europe) last month,

The Limerick-company had revenues of €18 million and prior to the acquisition said it expected sales of €25 million this year from core business in Europe and North America.

AMCS was founded by Jimmy Martin and Austin Ryan and will employ 180 people after the deal, including 50 staff at PCST. After the €23.5 million investment from Highland and Investec Ventures, group chief executive Mr Martin said the company planned to hire 40 additional staff and would consider making acquisitions as it expanded overseas.

“The acquisition of PCST provides real scale and genuine synergy, leveraging our common technology and combined industry expertise,” he said.

Mr Martin added the deal made AMCS a “one-stop software solution” for software in the recycling and waste-management industries.

PCST was founded by Donald Tefft in 1986 and has 2,000 customers, mainly in the US. It has also worked in Mexico and Canada, which Mr Martin has identified as markets the company plans to expand into.

AMCS has previously bought businesses in the UK, North America and the Nordic countries, and says France and Poland are markets it is expanding into organically.

After Highland invested in AMCS, two of its partners Tony Zappala and Fergal Mullen, both joined its board. Both men have track records in what Highland terms “transitioning to the big time.”

Mullen, a Dubliner based in Geneva, was previously a director of VistaPrint, an online supplier of printed and promotional material, which raised $120 million in an IPO in 2005, and now has annual revenues of over $1 billion.