Karlin Lillington: Some positive fallout may come from Brexit 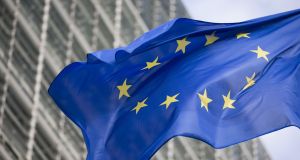 So now the vote has taken place, and even if the UK actually survives – which isn’t all that clear yet – Ireland and Malta will be the only English-speaking countries in the European Union. Photograph: Jasper Juinen/Bloomberg

I’ve written briefly in the past on the possible impact of Brexit on Ireland and its technology sector, arguing that it (obviously) offered opportunities and not just downsides.

Now that the UK has chosen the almost-unthinkable nuclear option, it’s a good time to return to those considerations.

First off, while the result might have been unexpected for most people (including me), the possibility of Brexit will have been a quiet selling point for foreign direct investment in Ireland for some time now.

Back when Cameron first promised a referendum on the issue (surely one of the most catastrophic political decisions of the post-war years in the UK), there will have been no way the State’s business agencies were going to let that opportunity pass by.

Alongside the usual IDA Ireland patter – young, educated workforce, English-speaking plus other languages, member of the euro, blah blah blah – could have been added a little quiet pitch about stability. Even in the aftermath of the banking crisis and the death of the Celtic Tiger, Ireland was solidly in the EU camp, not mulling a possible exit.

Did the IDA and Enterprise Ireland use such a pitch?

Well, doh, whether they admit to it or not, this will have usefully prepared the ground for many pending and future business location decisions.

Obviously it wasn’t something that could be done overtly given that it involved a major trading partner and our closest neighbour. And no government politician could be seen to push that angle either. But Brexit was a key business-risk consideration that had to hover in the back of any corporate investment decision.

So now the vote has taken place, and even if the UK actually survives – which isn’t all that clear yet – Ireland and Malta will be the only English-speaking countries in the European Union.

Ireland has direct flights to many major business centres in the United States, including New York, Chicago, San Francisco and Los Angeles, as well as to Europe.

And it will point to the ease of hiring across Europe in a highly-competitive job market.

And, of course, Ireland was really the only EU state besides the UK to think Boston as well as Berlin, as the old saying had it (though “Boston” seems a bit dated now as a reference point).

This is not to downplay the nightmare for Ireland of Britain’s exit; other commentators have been outlining the negative consequences since Friday’s vote. And the impact seems endless, with so many unanswered questions of what Brexit means on various social, political and business levels. But there are clearly positives to be exploited over time.

Another Brexit angle of relevance to businesses is the data and privacy impact.

But internally the nation will no longer have European protections, in a country whose government has already been campaigning to weaken encryption and broaden surreptitious surveillance.

The UK’s new Investigatory Powers (IP) Bill – also known as the Snooper’s Charter – also has to be a concern. The bill would give sweeping new powers to police and security agencies to collect bulk data, allow analysis of both public and private databases, permit the retention of the web browsing history of everyone in the country, and allow law enforcement and agencies to mass hack devices and computers.

It was comfortably passed in the UK parliament on its third reading this month, and now passes to the House of Lords.

If ever there were a piece of digital-era, anti-business legislation this is it.

The Snooper’s Charter in a post-Brexit Britain has to make Ireland look like a far more attractive alternative location for many companies.

But it also raises the larger question of how Britain could even trade with any state in the EU – the IP Bill would seem to place it outside any possibility of compliance with EU data-protection legislation.

And there’s that little issue of those Snowden documents indicating spy agency GCHQ’s long-standing, massive-scale, bulk surveillance of internet and other communications data traffic, disclosures that already have persuaded some companies, like Yahoo, to exit Britain already.

Perhaps time to start seriously considering an idea that was once mooted, then forgotten, back around the turn of the millennium – Irish-based transatlantic cables that would bypass Britain’s internet exchanges?

Now that would be an intriguing selling point for the IDA.

1 Money matters: ‘My father embarrassed us with his haggling’
2 Pilita Clark: When a rude boss keeps you waiting, why not walk out?
3 Comcast acquires Irish cloud-based telco Blueface
4 Henderson Park seek €400m+ for prime Dublin office blocks
5 Five things to watch out for in Apple’s earnings
Real news has value SUBSCRIBE