Irish people in the dark as to what blockchain technology is 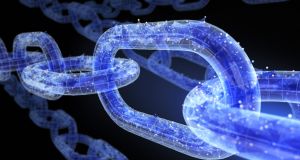 Blockchain is the technology that underpins popular cryptocurrencies such as bitcoin

Blockchain may be the next big thing technology-wise but most people in the Republic don’t know what it is and therefore haven’t considered a career in it, a new study reveals.

Despite a burgeoning blockchain community here, with companies such as Deloitte, Mastercard and ConsenSys all recruiting heavily recently, some 75 per cent of those surveyed by Amárach said they would not think of working in the sector.

The study of 1,000 people, commissioned by Wachsman, found that just over half of those who rejected the idea of a blockchain-related job cited a lack of understanding over what the technology is as their primary reason. Many also cited not having sufficient skills to work in blockchain.

Those aged between the ages of 25 to 34 years were most keen to work in the sector, with men more likely to be interested than women.

Blockchain is the technology that underpins popular cryptocurrencies such as bitcoin. A blockchain is an ever-changing record of transactions that is maintained simultaneously across computers in a network. The technology is seen as a major breakthrough as it ensures high levels of traceability and security in online transactions.

While most commonly associated with cryptocurrencies, blockchain is forecast to transform business models across a wide range of industries.

“With demand for blockchain technology experts skyrocketing both in Ireland and abroad, it’s important for people to realise that a career in blockchain stretches far beyond requiring a computer science, business of finance degree,” said David Wachsman, founder of the blockchain services group.

“Industry newcomers in Ireland can be professionally trained and educated on the disruptive power and potential of blockchain because it is quickly becoming among the most significant career opportunities of our generation,” he added.

1 ‘I’m so lucky to be in the Caribbean – a million miles from Derry Girls’
2 Michael Smurfit: ‘I asked Trump to invite me to the White House for my 80th birthday’
3 Covid-19: Small businesses are left as cannon fodder in our zealous anti-virus experiment
4 Irish business of Carluccio’s restaurants to be wound up
5 Revenue fears fraudsters tapped bank details of 3,000 taxpayers
Real news has value SUBSCRIBE