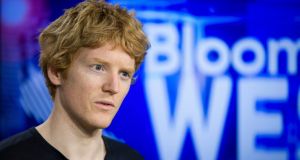 Patrick Collison, co-founder and chief executive officer of Stripe. The online payments company is now valued at $3.5 billion, after closing a $70 million funding round. Photo: Bloomberg

The firm, which is often touted as a rival for payments giant Paypal, offers processing services for online and mobile transactions. It lets businesses start processing credit-card payments in 139 different currencies, bank transfers, bitcoin and Alipay in less than five minutes, and enables software programmers quickly incorporate payment features into their apps.

Investors in the latest funding round included Sequoia, General Catalyst, Founders Fund, Khosla Ventures and Thrive Capital. They bring the amount of venture funding raised by Stripe to $210 million.

The San Francisco-based company, which was founded in 2010, raised $80 million from investors in January of this year.

Patrick Collison told the Financial Times that the company is still sitting on much of what it raised in January, but it wanted to “err on the side of being really well-capitalised” in case markets cool down.

In September, Stripe was named as one of Apple’s partners for its new Apple Pay service,along with Visa and First Data. The company is also powering Facebook’s “Buy” button, as well as an e-commerce feature for Twitter.

The brothers were at university – John at Harvard, Patrick at Massachusetts Institute of Technology – when they came up with the idea for Stripe in 2009.

The two already have a successful track record in the technology industry having established Auctomatic (which manages inventory for sites like eBay) in their teens, and sold it soon after for a reported $5 million.

Patrick is a former winner of the BT Young Scientist competition, taking the top prize for his programming language Croma.

He has been emphatic in the past that the company isn’t for sale, with Stripe reportedly turning down a multi-million dollar advance from PayPal last year.