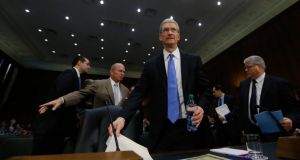 Ireland’s reputation took a battering at a high-profile US Senate hearing yesterday where the country was labelled a “tax haven” in an investigation into the offshore tax practices of technology company Apple.

The California-based firm was accused of avoiding tens of billions of dollars in US taxes by sheltering profits in Irish “ghost companies”, which did not have to pay taxes anywhere, under a special deal with the Irish authorities.

But, in the Dáil yesterday, Taoiseach Enda Kenny rejected claims that authorities had negotiated special deals with any business. He also dismissed the notion that Ireland was a tax haven.

“Ireland does not – I will repeat – does not do special tax-rate deals with companies. We don’t have any special extra-low corporate tax rate for multinational companies,” Mr Kenny said.

Speaking in Brussels, Tánaiste Eamon Gilmore said Ireland does not have any special low corporation tax rate for multinational companies and that the tax system was “based on Irish law”.

Ireland’s tax regime came into the spotlight as EU leaders gathered in Brussels to discuss the issues of tax evasion and tax fraud under the Irish presidency of the EU Council.


Tax incentive deal
Apple claimed in testimony that the company’s arrangements dated back more than 30 years when it had agreed a special tax incentive deal with the Irish Government to set up an operation in Ireland.

Mr Levin claimed that Apple had “quietly negotiated” with the Irish government an agreement to pay a low tax rate. The company confirmed that it had paid a top tax rate of 2 per cent on $74 billion of income over the past three years.

Mr Levin said that Apple had avoided the payment of $9 billion (€7 billion) – about $25 million a day – in US taxes in 2012 by using three Irish subsidiaries that Apple could claim were not resident in any country for tax purposes under what Apple’s head of tax described as an “Irish legal concept”.

But Tim Cook, Apple chief executive, defended the iPhone and iPad maker’s use of Irish companies. He said that the company was given a tax incentive by the Irish government when it set up in Ireland in 1980 as part of a recruitment drive to attract technology companies to establish operations in Ireland. Apple’s relationship with the Irish Government is “still there today”, he said.

“Given the tax rate that you are paying in Ireland I am sure you have a very close relationship,” Mr McCain said, to laughs from the public gallery.

Mr Cook said Apple’s Irish operations were “more than that” as they had grown to employ almost 4,000 people and its staff had “a significant skill base” where they “really understand” the European market.

In testimony to the senators, Harvard professor Stephen Shay, a tax expert, described Ireland’s tax system as “incoherent” because it did not levy taxes on non-Irish income passing through Irish companies.

1 BOI customers to be charged twice with bank fees on New Year’s Eve
2 How to gift your child a house deposit . . . tax free
3 Irish designer of Oxford vaccine: ‘I’ve never worked so hard in my life’
4 Son putting elderly dad under pressure to sign over land
5 Workers have little idea of the cost of retirement income
Real news has value SUBSCRIBE