HP expected to spin off PC and printer unit

Split would be a major turning point for the iconic company 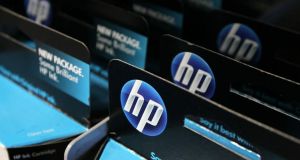 Hewlett-Packard is expected to announce today that it will split the company into two separate companies, a personal-computer and printer business, and corporate hardware and services operations. Photograph: Justin Sullivan/Getty Images

Hewlett-Packard is expected to announce today that it will split the company into two separate companies, a personal-computer and printer business, and corporate hardware and services operations.

The breakup will be a tax-free distribution of shares to shareholders next year, according to the Wall Street Journal, which first reported the split-up of Hewlett-Packard yesterday.

The separation of Hewlett-Packard into two businesses has been floated as an idea before. In 2011, chief executive officer Meg Whitman ended plans by her predecessor Leo Apotheker to spin off the PC unit. A split would be a major turning point for the iconic company, which was founded 75 years ago by Bill Hewlett and Dave Packard in a garage in Palo Alto, California.

While Hewlett-Packard put Silicon Valley on the map and spawned other successful technology companies, it and other rivals such as Dell and International Business Machines Corp. are facing major transformations as the industry shifts away from traditional computing to mobile devices and web-based software.

Efforts to spin off businesses are gathering steam at other technology companies. IBM has been shedding its hardware operations, including the sale of its PC unit to China’s Lenovo Group Ltd. in 2005, and last month, EBay announced that it would spin off its PayPal unit.

EMC Corp., a maker of storage computers, is exploring strategic options that could include a full or partial sale, or a spinoff of VMware Inc., and has also held merger talks with Hewlett-Packard.

The idea of Hewlett-Packard spinning off or separating the printers and PCs businesses came up in those discussions. The idea would have been to have a combined company focusing on areas such as storage, servers, software and security, the person said. Sarah Pompei, a spokesperson for Palo Alto-based Hewlett- Packard, declined to comment.

Whitman has been introducing new products and cutting jobs to trim costs since she took over as CEO in September 2011, seeking to turn around the iconic Silicon Valley company.

Hewlett-Packard has fallen behind in mobile computing at a time when consumers have migrated to smartphones and tablets, and last year lost its place as the largest maker of PCs to Lenovo. Split Impact Spinning off the legacy PC and printer business will have a small long-term effect on shareholder value unless the enterprise business takes off, said Erik Gordon, a University of Michigan business professor. “It is a little troubling to see Whitman split her time between a full-time job as CEO of the enterprise business and time-consuming duties as chairwoman of the legacy business that will require a lot of attention at the strategic level,” Gordon said in an e-mailed statement.

Hewlett-Packard’s printing and personal systems group reported $55.9 billion in revenue in the company’s latest fiscal year, compared with $55.6 billion for the technology solutions group, which provides systems support and consulting for other companies. The PC and printing had a combined operating profit of $4.84 billion, while the corporate services division had operating income of $5.85 billion. The company is holding its annual meeting with financial analysts in San Jose on October 8th. The shares of Hewlett-Packard are up 26 per cent this year, after almost doubling in 2013.