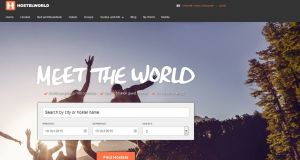 Hostelworld, the Irish travel website said to be eyeing a €340 million flotation, had a €200 million deficit at the end of last year, its latest accounts show.

Reports yesterday claimed that Hostelworld is exploring a possible dual stock market flotation in Dublin and London which would value it at up to €338 million.

The company, which also owns Hostels. com and HostelBookers.com, was reported to have appointed broker Numis Securities to advise on its options.

Accounts filed last month for the company show it had net liabilities of €202 million at the end of last year and was relying on the continued support its Luxembourg parent, H&F Wings Lux 3. The accounts noted that the directors were confident that it would get this support.

According to yesterday’s reports, private equity firm Hellman and Friedman, which controls Hostelworld, is looking to sell its share in the company.

Hostelworld is part of Web Reservations International. Its founder Ray Nolan sold the business to Hellman and Friedman in 2009 for €202.5 million. Mr Nolan ultimately realised €100 million from the deal.

While Numis has been charged with exploring a possible stock market flotation, the reports claimed that a sale of Hostelworld to a larger online firm is also being considered.

Web Reservations acquired HostelBookers.com in April 2013 for €100 million, in a deal that valued the group at more than €400 million.

Chief executive, Feargal Mooney, said at the time that companies in the budget accommodation booking industry needed scale to compete.

The group recently took a 20-year lease on a new office in the Green Reit-owned Central Park complex in Sandyford, South Dublin.

Reports yesterday said that the overall group had underlying earnings of €27 million in 2014.

The companies provide the owners of cheap accommodation such as hostels and bed and breakfasts with the software to take on-line bookings.

Their revenues come from a commission generated on each booking that their customers take via their systems.

He is also chairman of On the Beach, an on-line travel agent that floated on the London stock exchange recently with a £240 million value (€324 million).

1 Stripe moves payment processing to Dublin due to Brexit
2 Dublin Airport says pre-flight Covid tests possible ‘within days’
3 How long can Government afford to keep State pension age at 66?
4 How much state pension will I get next year?
5 Big night for Big Tech as Apple, Google, Amazon and Facebook post strong results
Real news has value SUBSCRIBE