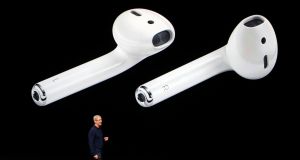 It was no surprise that Apple was ditching the stereo headphone jack from its new iPhone, but most people may have been caught off guard by the AirPods,the wireless version of Apple’s own headphones.

We got hands on with a set to see how Apple’s brave new world of wireless audio really works.

Take your regular EarPods – you know, the ones you got in the box with your iPhone, that you probably rarely use – and chop the wires off. Now stick them in your ears. That’s roughly the experience you get when you try the AirPods for the first time.

Ok, I’m simplifying it a bit. A lot actually. The AirPods are a lot more sophisticated than simply yanking some wires out of your existing headphones. Sure, they feel the same when they’re in your ears, but they have a whole heap of interesting technology inside. They feature Apple’s ultra-low power W1 chip, which Apple says delivers great audio and battery life, and dual optical sensors and accelerometers that detect when the earphones are in your ears. More on that particular feature in a moment.

Setting up the AirPods is simple. Open the charging case near your iPhone and you’ll get a popup on the screen that allows you to not only connect the AirPods to your iPhone but also any other device that your iCloud account is signed into.

The case also doubles as a charger. As soon as you pop the AirPods inside, they start charging, and when your 24 hours of power is depleted, you can charge the case through your lightning cable. You’ll need it too, because without it, you’ll only get five hours of listening out of your AirPods and it is highly likely that you’ll eventually lose one. Keeping them in the case will solve at least one of those problems. However, there is no backup for the AirPods. If you run out of charge, that’s it; there’s not way to hook up a cable to keep listening. Long plane trips would be out, unless you had a backup plan involving a second pair of headphones, and that would defeat the purpose.

The earphones don’t activate until you put them into your ears, which is where those optical sensors and accelerometers comes in. When you remove one or both from your ears, it will pause your music. Double tapping on an AirPod will activate Siri, who is only dying for you to tell it to crank up the volume or change track. That’s the other clever thing about the AirPods: they will also detect when you are speaking, and will focus on your voice, filtering out the background noise.

If you start your music through your iPhone’s speaker and then decide to switch to AirPods, the volume of the music will automatically lower so you don’t accidentally damage your hearing.

So with all that in mind, are the AirPods actually any good? From a quick test, the audio quality was decent, and they fit snugly into my ears. A little too snugly, perhaps, because the AirPods suffered from the same drawback I experience with the EarPods: they just don’t suit my ears. When the EarPods initially came out, I quite liked them. But over the course of using them for an extended period of time, I changed my mind. They were uncomfortable and hit the wrong parts of my ears. Whereas I could wear regular silicon buds for a few hours while working with little discomfort, the same couldn’t be said of the EarPods. It is purely down to anatomy though.

If EarPods are uncomfortable for you, then these are unlikely to be any better. Another thing to consider is sports use. If you are a runner, you are going to want something you know will stay put, and I’m not convinced the AirPods are it.

On the other hand, if you prize your EarPods and want something a bit more freeing, then the AirPods will suit you just fine. And with Apple killing off the stereo jack, it may be the sensible option.

AirPods will be available from the end of October.