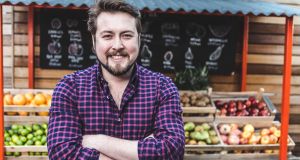 Devan Huges: ‘This expansion will mean Buymie is available to around 2 million people across 750,000 households in Ireland and the UK.’

The company is partnering with Lidl Ireland to offer same-day grocery serviceand personal shopping to 86,000 households in Cork, with the service going live from Friday.

The new roles are part of the 200 personal shopper jobs Buymie said earlier this year it would create.

“This expansion will mean Buymie is available to around 2 million people across 750,000 households in Ireland and the UK. 2020/21 will see rapid expansion the same day-delivery channel as consumers confront a new reality for the foreseeable future,” said Devan Hughes, chief executive and co-founder of Buymie.

“Given that not everyone is in a position to visit their local Lidl at present we are delighted to extend the Buymie service to six stores in Cork city,” said Conor Nagle, Regional Director for Lidl in Munster. “Cork is a very important market for Lidl and we continue to invest heavily in the county with a new store being built in Kanturk and an application lodged for Blarney in recent weeks.”

In June, the company raised €5.8 million in Series A funding, taking the total amount invested in the business to more than €10.5 million.

Initially available only in Dublin, the service found new traction during the pandemic, as people were unable or unwilling to risk shopping in person. Available throughout Dublin, the service is also offered to large commuter towns such as Greystones, Maynooth and Howth.

In May, it launched in the UK through a partnership with the Co-op, servicing 200,000 households in Bristol and surrounding suburbs.

In the first six months the company has seen total growth of more than 325 per cent year on year.

1 Son putting elderly dad under pressure to sign over land
2 Family in court dispute over hotels in Dublin and Galway
3 How to gift your child a house deposit . . . tax free
4 Dublin 8 investment with scope for income growth sells for €300,000
5 BOI customers to be charged twice with bank fees on New Year’s Eve
Real news has value SUBSCRIBE