Startup Angels say it can suppress investors and crowd the field, acting as disincentive 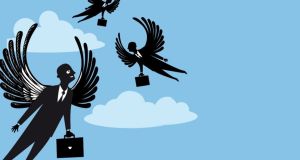 Angel investors are private individuals who invest in start-ups

Ireland’s tax regulations on early employee stock options and capital gains tax pose a risk to the growth of start-ups, a new report has claimed.

The Startup Angels, an international network investors and startup leaders, said that although favourable corporate tax rates and government regulations may be attracting the big multinationals to Ireland, persuading talent to leave these companies to work with startups can be a challenge.

The report also pinpointed government support as a surprising risk, saying it was at risk of suppressing angel investors and crowding the field, acting as a disincentive to growing the angel community here.

“The reality is, more angels and VCs are needed at the seed stage and beyond,” the report said.

Angel investors are private individuals who invest in startups, usually in return for an equity stake. Despite the perceived risks to the development of an angel community in Ireland posed by state agencies, there have been efforts to grow the sector. The Halo Business Angel Network is an all-island umbrella group that has assumed responsibility for the development of business angel syndicates on the island of Ireland, supported by Enterprise Ireland and Intertrade Ireland.

However, it’s not just about funding. Also crucial to start-ups is advice and mentoring. “Angels are critical to the early stages of every startup company and community. Beyond capital, they invest time, expertise, and networks. They help founders see around corners, beyond day-to-day challenges,” chief executie Leslie Jump. “Most importantly, they understand the potential of these emerging companies, and the transformational impact they can have on startup communities like Dublin. They’re willing to back them in meaningful ways to help founders achieve their goals.”

Dublin has plenty in its favour, with the report noting the presence of multinationals also led to a diverse talent pool that spans both geographical territories and industries.

Ireland’s small market size can also be a positive thing for businesses, allowing them to test ideas before scaling quickly into other English-speaking markets and beyond. The physical proximity of startup communities is also key, with the NDRC, the Guinness Enterprise Center, Trinity College, and Silicon Docks all within walking distance of one another.

Startup Angels will be hosting the AngelSummit Europe event in The Foundry at Google’s Barrow Street premises in Dublin on June 8th-9th.

“We see enormous untapped potential in Dublin, and across Ireland. That said, while Ireland’s done a great job of courting multinational technology companies to set up shop locally, they’ve done much less to incent local investors to put capital into Irish startups. They need to do more to raise awareness and remove obstacles to investing,” said Ms Jump. “We know there are thousands of potential angels in Ireland with millions in capital to invest. Our goal for AngelSummit is to help unleash that potential and unlock some of that sidelined capital.”