Apple to introduce its rival paid-for service next week 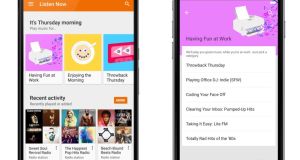 Google is adding a free tier to its subscription streaming music service, aiming to convert the millions of people who click on the Google Play Music app every month but turn away because they’re prompted for payment information

Google has launched a free version of its music streaming service, as it sought to upstage the debut of Apple’s rival service next week.

Google Play Music has offered a $9.99 per month subscription service for two years but this is the first time a free version of the streaming service has been introduced. It is available online and will be on Android and iOS by the end of the week, Elias Roman, Google product manager, said.

Apple said earlier this month it would launch a music streaming service on June 30th for $9.99 per month along with a $14.99 per month family plan, with a free three-month trial.

As with other streaming services, such as Spotify and Rhapsody, Google Play Music curates playlists. Users can tailor playlists based on genre, artist or even activity, such as hosting a pool party or “having fun at work.”

“We believe this is a play that will expose a lot of people to the service,” Mr Roman said in an interview.

Mr Roman said millions of people look at Google Play Music each month but are not ready to pay for a subscription. By offering a free version of the service, he said, the search engine hopes more people will be compelled to pay for an upgraded version.

“It’s a smart time to do it with all the attention around Apple,” Mr Cohen said. “If they did it absent the Apple service, it wouldn’t be the same story.”

Google declined to say how many subscribers it has but said they more than doubled in 2014 from the previous year. But rivals Pandora, Spotify and Beats Music had far more mobile downloads than Google Play Music in 2014, according to data from analytics firm App Annie.

1 Volvo warns of scaled back car line-up if UK splits from EU rules
2 NI house builder apologises to Harry and Meghan over adverts
3 Are there annual limits on inheritances or gifts to a child?
4 Who are Ireland’s 17 billionaires?
5 US threatens retaliation against EU over proposed carbon tax
Real news has value SUBSCRIBE