Google has seen the tide swing against it in antitrust cases 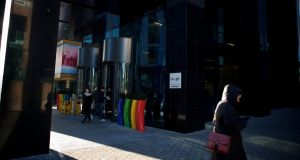 The entrance to Google’s Europe headquarters in Dubli. A landmark court ruling intended to rein in Google has instead put it at the forefront of Europe’s enforcement of Internet privacy. Photograph: Paulo Nunes dos Santos/The New York Times

For more than a decade, internet search and advertising giant Google has sparred with competitors in an expanding range of industries. After fending off charges of anti-competitive behaviour for many years, the company has seen the tide swing against it in antitrust cases.

The FTC drops a two-year antitrust probe of Google, concluding it has not manipulated search results to hurt rivals.

Brazilian antitrust watchdog CADE investigates whether Google unfairly scrapes the content from rival websites, discourages their advertisers and favours its own product listings in search results.

Back and forth between Google and EU over terms of a potential settlement that would have ended European Commission antitrust probe. Competitors complain Commission is letting off Google too easily. EU antitrust chief Joaquin Alumnia eventually admits resolution unlikely before his term expires later in 2014.

Mounting anti-Google feeling among European politicians is reflected in the passage of a symbolic, non-binding resolution calling for the break-up of Google’s search engine business from the rest of the company. The motion, which does not mention Google explicitly by name, passes with 384 in favour to 174 votes against.

Competition Commission of India (CCI) concludes a three-year enquiry into Google’s paid search results. It accuses Google of abusing its dominant position in search in a report which has yet to be publicly released. CCI has received Google’s response but sets no timeline for a final decision.

The federal trade commission opens a preliminary investigation into whether Google uses its Android operating system to dominate competitors.