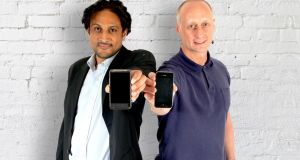 Mobads founder Kieran O’Keeffe, right: based in London, the company launched in October 2006 and has MobileWebAdz, Reporo, and BuzzCity as its brands

The value of the deal was not disclosed.

The newly-formed group will strengthen its market position as a global, mobile-focused, ad network with more than 1 billion impressions and 35 million clicks a day.

It also increase its geographic reach into the high-growth emerging smartphone markets of Indonesia, Thailand, Malaysia, India, Bangladesh, and Africa.

With limited overlap in clients, publishers and advertising formats, Mobads said it expects to achieve “extensive new lucrative, synergistic opportunities for its existing and new partners”.

Based in London, Mobads launched in October 2006 and it has MobileWebAdz, Reporo, and BuzzCity as its brands.

Commenting on the BuzzCity deal, Mr O’Keeffe, who is chairman of Mobads, said: “The mobile advertising segment still shows enormous growth potential for the next four years, with a doubling of smartphone penetration in the emerging markets.

“As the availability, affordability and desirability of smartphones has increased, penetration of this device will continue to surge in that region.

“It now provides our group the perfect opportunity with BuzzCity’s stronghold in Asia and Africa aligned to our existing client base in North America, South America and Europe to continue to offer the reach and scale our local, and global partners want.”

Mr O’Keeffe has been nominated in the international category for this year’s EY Entrepreneur of the Year awards, the winners of which will be announced on October 27th.