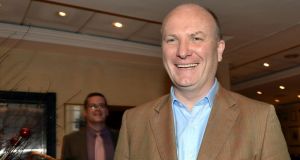 Businessman Declan Ganley has alleged the Red Compartida process is being fixed in favour of other bidders. Photograph: Brenda Fitzsimons

Rivada Networks, the networks company founded by Galway businessman Declan Ganley, could find out next week if it is to be let back in to the bidding process to build a $7 billion mobile network for the state in Mexico.

Rivada has asked a judge in Mexico to be readmitted to the bidding for the Red Compartida project, from which it was excluded last Friday for allegedly failing to file proper paperwork. Rivada, which was in the final two bidders, insists it filed all necessary paperwork according to Mexican public-private partnership rules.

Mr Ganley has alleged the Red Compartida process is being fixed in favour of other bidders, and he also alleges a hijacker attempted to steal Rivada’s bidding documents as they were being delivered in Mexico city.

An emergency legal bid by Rivada to be readmitted to the bidding process has been referred by a federal judge to a specialist telecommunications court.

“We expect to hear from them early next week,” said Rivada spokesman Brian Carney.

If the specialist telco court declines to readmit Rivada the company appears to have limited other options to appeal its exclusion.

Telecoms analysts suggested to the Business News Americas publication, however, that the company could still sue the state over the terms of the bidding process.

Gerardo Flores, a Mexican Green Party senator, has criticised the bidding process following Rivada’s exclusion. There is currently only one bidder left, despite more than 100 expressions of interest.