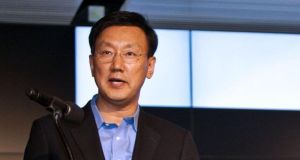 The company, which offers an easy to use video editing platform, this week confirmed Mr Sohn, who was president and chief executive of Samsung Telecommunications America, had joined its team.

The Irish-based firm was set up by siblings Catriona, Cormac and Colm Barry in the basement of their parents’ home.

Chief executive Catriona Barry said Mr Sohn had brought valuable experience to the firm, acting as a mentor to the team and helping them to grow and partner with the right people.

“He has taken a really active role,” she said. “He has given us insight into how large companies view smaller technology companies, what they look for from them and how they approach deals.

“It has changed our mindset and allowed us to grow quicker.”

Mr Sohn, who left Samsung in 2013, said he was excited to join the company.

“I was first introduced to the Trakax team in Korea some years ago and was hugely impressed with their user design creativity and with their development competence and capability in the whole field of multimedia creation software,” he said.

However, there are plans to add additional features to the Android app that users can unlock through in-app purchases.

More than five million people use the PC version of the software, trakaxPC, while the Android app has wracked up 57,000 downloads.

“We were concentrating on Android and PC because we felt Apple users were well catered for in movie editing,” she said.

The concept behind the software is to allow anyone to create videos.

Although the software is designed to be easy for users to get to grips with, allowing those with little or no editing experience to create fun and interesting movies, it also includes more advanced features that users can access as their experience grows.

It can also be used by small businesses to create videos and slideshows or even podcasts.

Trakax is set to grow further, with a funding round already under way. Until now, the company was mainly funded by private investment from the founders and friends.

There are also plans to offer the software on a subscription model, moving to Software as a Service (Saas) basis. It currently employs six people, including the Barry siblings and their father.

The siblings were in New York this week to ring the Nasdaq opening bell in Times Square, an opportunity that came about after the company took part in the Start-Up Village Pitch Competition at SXSW last year.

“It was brilliant, a real blast,” Ms Barry said. “To see Trakax and our products on Times Square was great.”