Fitbit revenues to be hit by soft demand and production issues 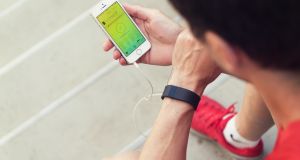 Shares of the company, which also reported lower-than-expected quarterly revenue, plummeted more than 30 per cent in extended trading on Wednesday and were set to hit record-low levels on Thursday.

Fitbit forecast revenue of $725 million to $750 million for the October-December quarter. That was well below analysts’ average estimate of $985.1 million, according to Thomson Reuters.

The forecast implies revenue growth of 5.4 per cent at the top end. Analysts were expecting growth to pick up to 38.4 per cent from the 23.1 per cent in the latest third quarter, which is the smallest rise since the company went public in June 2015.

“We continue to grow and are profitable, however, not at the pace previously expected,” chief executive James Park said.

Fitbit’s transition to its newer products, greater-than-anticipated softness in the “wearables” market and production issues with the new Flex 2 wristband were the chief causes for the weak outlook, chief financial officer Bill Zerella told Reuters.

The production issue - Fitbit found it “incredibly difficult” to find small-enough batteries to fit - started in the third quarter and is not expected to be resolved before the end of December, Zerella said. He estimated that hit Fitbit’s revenue forecast by about $50 million.

Fitbit is the leader in the fast-growing wearable devices market, according to research firm IDC. The company expects worldwide shipments of such devices to rise 29 per cent in 2016 and more than double by 2020.

But, Fitbit’s top position is under increasing threat from rivals such as Apple, Samsung, Xiaomi and Garmin, whose devices have features that rival those in Fitbit’s devices.

“Fitbit’s destiny isn’t completely within their control. Unless companies find a way to get a mass market of consumers to put devices on their wrist, there’s a limited upside there,” said Forrester analyst Julie Ask.

While revenue growth has been slowing, it had topped analysts’ estimates in its five quarters as a public company. That streak ended in the latest third quarter.

However, the average selling price for its devices fell to $93 from $99 in the prior quarter, and missed analysts average estimate of $98.25, according to FactSet StreetAccount.

Revenue in its Asia Pacific market plummeted 45.1 per cent to $35.7 million as sales partners continued to work their way through existing inventory of devices.

Operating expenses jumped 52.4 per cent, largely due to higher research and development costs. The company’s net income plunged about 75 percent to $26.1 million.

1 Basic income for all: Has the Covid crisis given us a new economic model?
2 Direct sea routes to Europe offer certainty in choppy Brexit waters
3 ‘I don’t need to do any of this. . .I don’t actually need to work.’
4 Admission of mistake in Oxford vaccine dose raises doubts over reliability
5 Promontoria barred from pursuing doctor over Ulster Bank loan
Real news has value SUBSCRIBE