Find out who tweeted it first 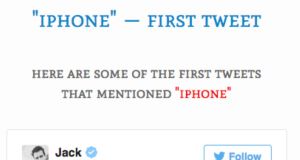 Amit Agarwal has been blogging about tech for over a decade. He has also developed some pretty cool Twitter tools including First Tweet, a search engine that returns the first ever tweet mentioning a particular word or phrase. There are some interesting but typical ones given in the examples, such as who tweeted the first smiley face or who was the first to mention the iPhone. You can, of course, search the first time “I love the Irish Times” was uttered (thanks, Ed Byrne). It’s entirely up to you. Agarwal has some other useful tools including Tall Tweets, which allows you to post longer tweets – either in successive chunks or as an image.