Emphasising the beauty and joy of computing for girls 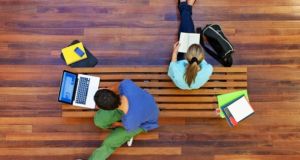 Does a subject have to be “girly” to attract girls?

It certainly would appear that rethinking the way an area of study is presented, and making some changes in emphasis, can indeed draw more female interest.

This week, the San Francisco Chronicle highlighted how both Stanford University and the University of California at Berkeley have increased female enrolment in computer science, doubling numbers in under a decade – in part by reconsidering the way the subject is taught.

The number of female students (106) is now greater than male (104) this term in a Berkeley computing course designed for “non major” students, those who are not specifically studying computer science.

The class, entitled The Beauty and Joy of Computing

, was formerly known as the distinctly more mundane Introduction to Symbolic Programming.

Prof Dan Garcia, who teaches it, notes that “everything that turns women off, we reversed it”. More context was put in, to highlight the relevance of various aspects of computing. Each class begins with a discussion on a news article focused on a tech topic.

Some women who have taken the class have switched to a computing major.

If the title seems slightly cringe-making, it is actually a phrase from venerable male IBM computer researcher Grady Booch. (I’ve interviewed him before – he’s an interesting iconoclast, and exactly the person to identify both the beauty and the joy in computing.)

The topic of feminising Stem (science, technology, engineering and mathematics) subjects may be even more wince-inducing.

But then, that’s depending on how you define “feminising”.

The truth is that the subjects need to be rethought for both men and women. Male enrolments in computer science are also down significantly, and they are unlikely to recover any time soon to address the skills gap – the need for Stem graduates – all over the world.

These are major shifts. In 1984, women made up 37.1 per cent of computer science graduates in the US. Now it is less than a quarter.

If the proportion of women was that high back when people weren’t talking about “feminising” such courses at all, maybe something more was going on

– in computing, in society, in the way people thought about careers.

Although many studies show that girls are turned off by associations between computer science and the accoutrements of geekiness, such as Star Trek posters (yes, really), just consider the young college woman of 30 years ago opting for a CS degree when computing
was pretty harcore geek stuff.

The year 1984 was at the tail end of the era of running punch cards. Students studied high-level maths; they spent hours writing and compiling code in special computer rooms to which they had limited access, nothing like today’s computer labs, open to all.

The command line interface was king (or is that queen?). Apple had only just introduced the graphical user interface, actual pictures and typefaces on the screen.

Feminine role models
We are not talking about today’s era of social networking, smart phones, tablets, Google Glass, smart watches, whizzy, computer-made special effects in films, and other implementations of the microprocessor that are all pretty darn cool.

Yet well-intentioned approaches to getting girls interested in computing these days include girly computer games, and Mattel’s Computer Engineer Barbie , complete with pink plastic laptop, an effort supported by the Society of Women Engineers in the US.

And they include arguments that girls need more feminine Stem role models.

But a 2012 study, My Fair Physicist , indicates that girls around age 12, especially those not already interested in Stem topics, are actually more turned off by feminine role models.

“Rather than opening these girls’ minds to new
possibilities, the feminine Stem role model seemed to shut them further,” the authors said, noting that girls seemed to see the combination of attractive femininity and Stem capability as highly unachievable.

It seems the Berkeley class is getting it right (it’s the first time the university has ever had a CS class with more women in it than men) and might be a model to bring back to schools.

You don’t need a pink laptop. Nor do you need role models that value both lipstick and logarithms.

Instead, try this recipe, for men and women, boys and girls.

And let the beauty and joy of the subject draw students in.