Speakers include prof Leonard Kleinrock, the founder of Arpanet who will deliver keynote address 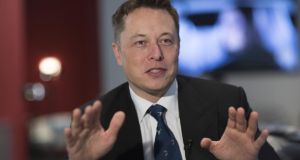 Elon Musk, billionaire, co-founder and chief executive officer of Tesla Motors will be the closing speaker at this year’s Web Summit

With the Web Summit kicking off tomorrow, organisers kept one speaker as a last minute surprise: entrepreneur Elon Musk.

The co-founder of Paypal, electric car company Tesla Motors and chief executive of SpaceX will partipate in a fireside chat at the closing of the Web Summit on Thursday, along with Taoiseach Enda Kenny and Sherpa Ventures co-founder Shervin Pishevar

Mr Musk joins a roll call of well known founders, investors, chief executives, inventors, designers and thinkers in the tech industry and beyond who are speaking at the web summit. Also speaking at the event is ; investor and Skype co-founder Niklas Zennstrom; Cisco’s Padmasree Warrior; Dropbox cofounder Drew Houston; and professional skateboarder and head of the Tony Hawk Foundation, Tony Hawk.

About 10,000 people are expected to attend the Web Summit, with the final batch of tickets released over the weekend.

The Web Summit events kick off this evening with a two-hour guided tour of some of Dublin’s famous pubs for groups of attendees, led by entrepreneurs, professional athletes, musicians and others. An opening party is also taking place this evening, with a number of invite only events taking place over the course of the two-day event.

The Nasdaq opening bell will be rung at the event on Wednesday.

There are a number of stages at the Web Summit, from the main stage to ones that deal specifically with digital marketing, cloud, developer and startup stages.

The Irish Times has linked up with the Web Summit for the Library Stage, which is aiming to give a deeper look at the web, from how tech can help prevent childhood obesity to augmenting human intellect through computer interaction.

One notable addition to the stage is prof Leonard Kleinrock, one of the founders of Arpanet, who will deliver a keynote on the history of the internet, and participate in a panel on the future of research and development.

Richard Stallman, a major force in the open source movement, will also be giving a keynote, delivering a speech on the ethics of engineers on Thursday, while a panel in commemoration of Douglas Engelbart, the pioneer of human-computer interaction who died this year, will also takeplace on Thursday, with Siri cofounder Adam Cheyer and Michael Buckwald, the founder of Leap Motion.

Also taking place this week is the Food Summit, which is running alongside the Web Summit, and will be free of charge for attendees. The Night Summit, meanwhile, will compromise a series of night-time events around the city, with Irish acts taking to the stage to entertain attendees.