Telecoms company sees fixed line access decline by 22,000 in second half of 2014 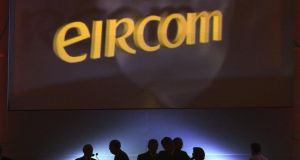 Eircom directors pictured at the company’s last agm. The company said on Friday its broadband customer base rose by 30,000 over second half of 2014.

Revenue at telecoms company Eircom fell by 4 per cent to €629 million for the six months to the end of December on the back further losses in its fixed line business.

Fixed line access net losses for the period were 22,000, the company said, with fixed line revenues down 5 per cent to €474 million.

However, the losses were partially offset by a reduction in operating costs which fell by 18 million or 4 per cent to €403 million.

Ebitda (earnings before interest, tax, depreciation and amortisation) declined by 4 per cent to €226 million, in line with management expectations.

The company said it had 202,000 fibre-based high-speed broadband customers at the end of last year.

Mobile ebitda rose by €4 million to €17 million, while mobile revenue fell by 1 per cent to €178 million.

Eircom said it gained 34,000 mobile customers over the six months giving it a total of 1,090,000 subscribers. It added 34,000 postpay customers during the period under review and such subscribers now account for 42 per cent of the overall base, up from 37 per cent compared to the same half-year in 2013.

“We continue to stabilise our financial performance and our results are in line with expectations. The positive momentum in our KPIs continues, driven by our bundling strategy as well as a strong Christmas trading performance in our mobile business,” said chief executive Richard Moat.

“ The fixed line business is stabilising and the mobile business continues to perform well, with three consecutive quarters of revenue growth. A strong Christmas trading performance resulted in the first quarterly growth in the prepay base in over two years, “ he added.