Dublin to lose Web Summit to Lisbon from next year 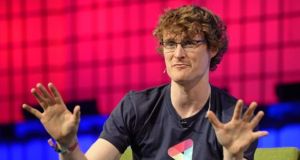 The company behind the Web Summit has announced plans to move the annual tech expo from Dublin to Lisbon from next year.

The move comes as a blow to policymakers here who have traditionally used the event to showcase Dublin as a tech hub.

Organisers of the summit, which expects to see 30,000 attendees at Dublin’s RDS next month, declined to comment on what, if any, financial incentives have been offered by the Portuguese authorities.

Following last year’s summit, chief executive and co-founder Paddy Cosgrave was criticical of facilities in Dublin, most notably the quality of wi-fi at the RDS venue and the availability and pricing of hotel rooms.

He said the summit had grown beyond what he and co-founders Daire Hickey and David Kelly thought possible five years ago, and that they had been considering a move away from Ireland for some time.

The company, which employs 130 people at its headquarters in Dublin, will continue to be based in Dublin.

In a statement, the RDS said the Web Summit organisers have “full responsibility for the installing and managing” of the wi-fi service at next month’s event. “ They intend to use an international third party provider for this service and we have been facilitating this process since November of last year,” a spokesman said.

Excited to announce #WebSummit is moving to Lisbon in 2016 http://t.co/njyaONRH03

We'll be in real trouble if the ploughing championships ever moves to Lisbon... #websummit

The Web Summit giveth and then it taketh away.

Lisbon is cheaper and warmer with a better transport infrastructure and restaurant culture than Dublin. Is the @WebSummitHQ move a surprise?

Web Summit representatives made the formal announcement at a press conference in Lisbon alongside Portugal’s deputy prime minister Paulo Portas.

Next year’s event will now be held at the MEO Arena and FIL Feira Internacional de Lisboa in the Portuguese capital.

“This is a big move for us, to leave Dublin after five years,” the company said in a blog post.

“ Web Summit started its life in a sitting room in Ranelagh. The first event was small, with just 400 attendees. Since then, Web Summit has grown into the most important gathering of startups on the planet.”

“We know now what it takes to put on a global technology gathering and we know that if Web Summit is to grow further, we need to find it a new home. Our attendees expect the best.”

“Lisbon is a great city with a thriving startup community. What’s more, it has great transport and hotel infrastructure and a state-of-the-art venue with capacity for more than 80,000 attendees.”

Taoiseach Enda Kenny said he had spoken to Mr Cosgrave about his requirements for the summit, but he had made his own choice to move it elsewhere.

Mr Kenny said the Web Summit had been a “great addition to Ireland’s reputation”.

When asked if the Government had failed to meet the requirements that Mr Cosgrave sought, Mr Kenny responded: “It’s not a question of meeting demands, it is an individual choice

“The authorities will look at how to improve facilities and other operations like it. Ireland is moving on and we have an enormous reputation internationally in terms of what we can do.”

The Minister for Finance Michael Noonan stated that the Web Summit was an annual event and could come back to Ireland.

He responded: “Dublin is chock-a-block with business at present. The hotels are full nearly every weekend so I don’t think that people will be disappointed. There is still a lot of alternative business I hope.”