Six personnel trained in operating the devices in past three months 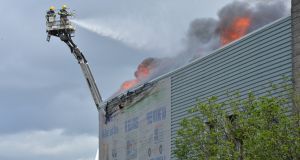 Dublin Fire Brigade is close to completing guidelines on its use of drones which are likely to be integrated into operational use by the end of the year.

The unmanned flying devices will be deployed as a means to gather crucial operational intelligence on fires and other emergency situations.

It is a reflection of the times where the rapidly developing technology has endeared itself to myriad industries, with film and TV crews, archaeologists and even steeplejacks taking to the skies.

At Dublin Fire Brigade, six personnel have been trained in operating the devices since their formal introduction three months ago.

A severe and prolonged blaze at Ballymount industrial estate in Dublin last April presented a first opportunity to test their effectiveness. Drones can climb higher than traditional fire ladders, and film expansive areas, allowing officers to gather crucial information in an short timeframe.

While Dublin Fire Brigade is reluctant to comment on the potential extent of future drone usage, it is clear they have the ability to significantly enhance responses to emergencies.

In the UK, the technology has been adopted by fire services, where they have been fitted with infrared cameras that can penetrate smoke, as well as night-vision capability.

Dublin Fire Brigade says its careful, measured approach to developing guidelines and introducing them to the public arena is critical.

“It’s very early days. We want to be slow with this and make sure everyone moves along with this rather than being scared off,” assistant chief fire officer Dennis Keeley told The Irish Times, stressing the importance of public confidence.

“There is an onus on us that we don’t damage a tool that could be very useful.”

While the science fiction scenario of drones navigating the interior of burning buildings to locate survivors may one day become science fact, their immediate application is less penetrative but appears to be of significant value.

Locating missing people, measuring the extent of fires and helping calculate the logistics of fighting them are just some of the immediate advantages offered by a relatively inexpensive and fast developing technology.

When Dublin Fire Brigade units respond to call-out today, its “incident command system”, overseen by a senior officer, must quickly ascertain the extent, location, intensity, layout and geographical spread of a fire.

“When you pull up you often have a lot of smoke, and it’s not always immediately clear where the concentration of the fire is,” said Mr Keeley.

“From an operational perspective, to have an overview, an ability to step back from the situation and a quick [visual] of an incident from an aerial shot can be quite advantageous.

“Where drones operating would come into huge advantage would be with larger wildfires and gorse fires which we suffer in the summer months and can often have a larger spread.”

The service is also considering a second drone fitted to the Dublin Incident Command Unit vehicle, which is dispatched in more complex incidents.