Dispute over €2.95m sale of Georgian property struck out 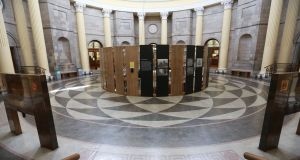 The Commercial Court struck out a dispute concerning the €2.95 million sale of a Georgian property in Dublin 4.

A dispute concerning the €2.95 million sale of a Georgian property in Dublin 4 has been struck out by the Commercial Court.

Blucher Ltd, a real estate company, secured an injunction last month restraining receivers appointed over the property at 25 Wellington Road acting on foot of a second sale completion notice, forfeiting a €295,000 deposit or offering the property for sale.

The case was adjourned so that an application could be made to have the entire proceedings entered into the fast track Commercial Court. On Monday, Oliver Butler, for Blucher, told Mr Justice David Barniville a notice of discontinuance had been served in the proceedings.

The judge said he noted that and struck out the case. The court heard last month Blucher had entered a contract last February to purchase the property for €2.95 million and paid a deposit of €295,000.

Blucher sought to restrain the receivers, Kieran Wallace and James Sharkey of KPMG, acting on foot of a sale completion notice served on June 10th last and due to expire on June 25th.

Blucher claimed in court papers the June 10th completion notice, the second such notice, was invalid for a number of reasons including lack of agreement, in light of the Covid-19 pandemic, on where the sale closing was to be held.

British economic output declines by record 20.4 per cent 07:39
Glanbia sees sharp decline in earnings due to Covid-19 crisis 07:34
AIB’s mortgage blushes; Cairn’s new home profits; and dog days at Arrow 06:21
Objectors stall production of enough timber for 1,000 houses 05:31
Moving in and out of lockdown is a recipe for economic disaster 05:30

1 Moving in and out of lockdown is a recipe for economic disaster
2 Objectors stall production of enough timber for 1,000 houses
3 Revised help-to-buy scheme opens for applications
4 ‘No demand... because there are no people’ at well-known Dublin pub
5 AIB concedes Covid mortgage policy was ‘regrettable’
Real news has value SUBSCRIBE