Companies awash with data do not know how to exploit it, says Dell Technologies chief 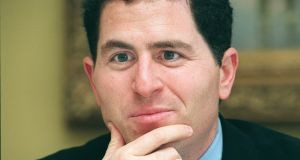 Dell Technologies chairman and chief executive Michael Dell: “All I know is something cool is going to happen.” Photograph: Peter Thursfield

Dell and EMC, now jointly known as Dell Technologies, are attempting to succeed where giants such as Hewlett-Packard and IBM have failed in the past: to become a comprehensive end-to-end tech product and service provider. The secret ingredient, says Dell Technologies chairman and chief executive Michael Dell, is data.

Speaking to The Irish Times at the first Dell EMC World technology conference, which opened yesterday in Austin, Texas, Dell attributed the vast array of new products and services the newly merged mega company is now able to provide in every space – consumer, enterprise, even on state or national level – principally to the ever-increasing amount of data available to anyone equipped with the tools necessary to make sense of it.

“Companies are dealing with so much data, they don’t know what to do with all of it,” said Dell. “Even the data tech being made available in our smartphones is developing so rapidly it’s hard to keep up.

“By the time many businesses have figured out what to even do with all the existing customer data they have, the technology has moved on. But that’s where it gets even more exciting, because the cost of making something intelligent – that is, something that can make sense out of all the data – is almost zero.” The sensors that can detect and manage this “torrent” of info, says Dell, are becoming cheaper and better every day.

And that’s all just happening in predefined machine-learning models. Dell predicts even greater innovations in the next major development in artificial intelligence.

“There’s something pretty new called unstructured learning, where machines look at massive amounts of data with no predefined models or guidance as to what they’re looking for,” he said. “We humans can’t even comprehend the kinds of intelligence machines could make out of this data. All I know is something cool is going to happen.”

Thousands of people travelled from every corner of the globe to see what might be unveiled at the first public event since ell officially announced last month that, after a year in talks, he had sealed the deal and purchased EMC Corporation for a record $67 billion, the biggest tech acquisition to date.

Dell has held his annual tech extravaganza for the last six years at the Convention Centre in downtown Austin, the city where he began his computer enterprise in 1984.

They say everything is bigger in Texas; but, ironically, the Lone Star state just met its match with the bittersweet announcement this week that from next year, Dell EMC World would be held in Las Vegas due to a lack of suitable convention space in Austin.