Venture capital firm Octopus joins in round for the Dublin-based money exchange platform, which pitches itself as the cheapest way to transfer €2,000-plus 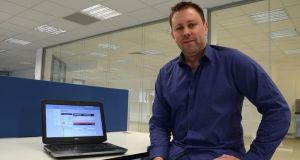 The Dublin-based company, which offers peer-to-peer currency transfer, currently employs about 50 people in Ireland and a further seven in Australia. Chief executive Brett Meyers said he expected to add 50 jobs here by the end of 2015.

Also on the cards is a mobile app later this year, and an increase in the spend on advertising and marketing.

“This year we’re focusing on nailing the core product,” Mr Meyers said. “Then we can look at other geographies.”

The latest round of funding was led by UK-based Octopus Investments, a new investor in the firm. Existing backer Frontline Ventures also participated in the round.

Mr Meyers said the participation of Octopus, whose investments include Zoopla Property Group, Secret Escapes, SwiftKey, graze.com and YPlan, came after months of discussions with the venture capital firm.

“The fintech scene is incredibly exciting at the moment, and nowhere more so than in international transfers,” said Rebecca Hunt, a member of the ventures team at Octopus Investments.

Established in 2009, CurrencyFair offers consumers a way to avoid banks and higher fees

when transferring foreign currency. It pitches itself as the cheapest way to transfer amounts of €2,000 or more.

Customers can exchange funds using a “money-matching” model to help them get the best exchange rate for 16 currencies. Among CurrencyFair’s target market are retirees and foreign property owners who regularly send £2,000 or more in the form of pay, pensions, mortgages and rents.

“It is amazing to see groups of expats, pensioners and small businesses all over the world switch to adopting CurrencyFair’s unique marketplace system for moving money internationally,” said Will Prendergast, partner at Frontline Ventures. “It is always the unexpected behaviour change that means you are on to something big.”

The company reached a milestone last year when it broke $1 billion in money- matching transfers.

Despite this, banks still remain the firm’s main competition, Mr Meyers said. “It’s tough to introduce a product that benefits people but they don’t realise it.”

Mr Meyers said the business has room to grow and is still at a small stage. Another benefit of the funding is that it will allow the company to boost its marketing and bring the platform to more people.

“It’s all helping to educate people to how much they are actually paying. Most people don’t realise how expensive it is,” he said.

“The more noise we make, the better.”