Collison brothers say $1.75bn tech firm is not for sale 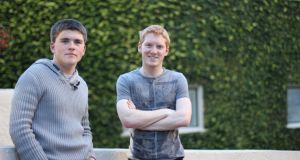 Irish brothers Patrick and John Collison have no plans to sell their $1.75 billion business and will use $80 million in fresh investment raised yesterday to fund further international expansion.

The brothers, from Limerick but now based in the US, set up the online payments company in 2010, and have been steadily building the team behind Stripe’s success ever since.

The latest round of funding pushes Stripe into the billion dollar club, setting the current valuation for the business to $1.75 billion.

But chief executive Patrick Collison said there won’t be a rush to take advantage of the valuation.

“We’ve no interest in selling the company. John and I are very lucky to work with the people we do on building something for the long term, and we wouldn’t like to change that,” he said.

Rather, he said, the company will continue to build on its success to date.

“This investment will hopefully enable us to speed up our hiring and international expansion. From the start, making Stripe available throughout the world has been a large part of our mission,” he said.

Plans to expand
Stripe is quickly becoming a recognisable name in ecommerce, with backers such as Paypal founder Peter Thiel and entrepreneur Elon Musk, and the company has plans to expand it even further.

It has been expanding its team steadily in recent months, and at its most recent count employed 83 people.

The firm, which is being touted as a rival for payments giant Paypal, has seen some success in recent months as it signed up new customers including Shopify, Reddit and the Museum of Modern Art in New York.

“The funding doesn’t change much. It’s nice to see outsiders recognise the progress of the business in 2013, but it’s important to keep it in perspective,” said Patrick Collison. “There’s a lot of work we want to get done in 2014, and the focus will remain on that.”

Operating in 12 countries
The company began offering its services to Irish users last year, and also operates in the US, Canada and the UK. The company is also testing its services in Spain, France, Germany, Netherlands, Belgium, Australia, Luxembourg and Finland, bringing the number of countries to 12.

Stripe has also promised to bring the service to more European countries as it seeks to build on its main mission: to make accepting payments online easier for web developers.

Mincon acquires Finnish company Lehti for €8m 07:19
Irish billionaires, Hogan goes to Davos, PTSB’s CEO race and Ibec’s election wishlist 06:46
Azure seeks to protect Ireland against medicine shortage 05:40
Companies should not use the climate crisis as a scapegoat 05:30
‘The only time I saved money was some coins in my first piggy bank’ 05:20

1 Ireland has fifth-largest number of billionaires per capita in the world, says Oxfam
2 Irish rents see second-highest increase in the EU since 2007
3 Companies should not use the climate crisis as a scapegoat
4 Javid’s EU divergence plans provoke industry backlash
5 PTSB finance and operations executives vie for chief executive job
Real news has value SUBSCRIBE