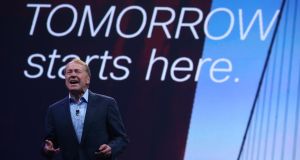 Beware the coming “brutal, brutal consolidation” of major technology companies into just a handful of survivors, where many of the best-known names of today will fail to make the grade.

That was the tech apocalypse predicted by longtime Cisco chairman and chief executive John Chambers in a keynote speech at his company’s annual Cisco Live conference in San Francisco last week.

“If you look at the top companies in the industry, most of them will not exist in a meaningful way in 10 years,” he told his audience. Of the current top five global IT companies, in which he numbers IBM, HP, Microsoft, Cisco, and Oracle, “only two or three of us will be meaningful in as quick as five years”.

He also showed a slide that implied most of Cisco’s big name competitors today will be gone by 2018, including Huawei, Juniper, Avaya, Checkpoint and Palo Alto Networks. For that matter, most of today’s big name companies in technology and all other business sectors, would be gone.

So, are these well-considered predictions, or just attempts to grab headlines with some keynote drama?

“I’d love to disagree with John Chambers, but he has got it spot on,” says Irish-based serial entrepreneur Raomal Perera, who is also adjunct professor of entrepreneurship at graduate business school INSEAD.

However, he notes that Chambers’s slides and his keynote failed to mention one of Cisco’s potentially most aggressive challengers, VMWare, and wonders if Chambers sees it as one of the survivors.

Apparently not. A week earlier, in a conference call with analysts, the Cisco chief outlined how Cisco would eliminate its rival, which has threatened Cisco’s large margins on network equipment with integrated proprietary software, by supplying software for commodity hardware.

However, Cisco has had to move into that space itself, in order to compete, and many analysts consider VMWare to be more than capable of holding its own.

And, some analysts wondered where Cisco would find the expansive, cross-sector growth that Chambers outlined as necessary to survival, especially as Chambers, who has led the company for 19 years, is expected to step down in the next two years.

“They are the networking company. The question is, where does Cisco go from there?” Lee Doyle, principal analyst at Doyle Research, told IDG News Service. “They’re a long way from being a dominant IT company.”

Cisco still has its own challenges, including a stretch of bland financial results.

Chambers’s slides showed that Microsoft – often viewed as a troubled company – has had the greatest number of quarters (14) of at least 3 per cent growth in the past four financial years.

Irish entrepreneur Dermot Casey, principal at strategy advisers Near Future and a lecturer at the Smurfit Graduate School of Business, agrees with Chambers and goes further, noting that Microsoft produces that profit on $50 billion or $60 billion dollars in annual sales, whereas Facebook, considered one of today’s more successful internet giants, struggles on $1 billion.

Perera thinks Facebook will nonetheless be there in the future. “Facebook and Google will be here but I think Twitter will be bought by one of them. I can’t see Twitter surviving on its own.”

Although Microsoft’s position remains “tricky”, it is better, Casey thinks, than some others on the list. Of Chambers’s big five, Casey says – as Chambers implied in his keynote – that the demise of two is already underway: HP and IBM.

Casey believes IBM has gradually declined since Lou Gerstner left in 2002, after staging a major turnaround widely seen as having saved IBM after it failed to respond adequately to a market shift towards smaller, cheaper computers in the 1980s.

Meanwhile, HP has not grappled successfully with the decline of the PC market, Casey says.

HP’s announcement last week of fresh, large-scale layoffs of up to 16,000 workers, in addition to 34,000 already-planned redundancies, signals continuing struggles in the company.

“There’s almost an Industrial Age nature to what the big technology companies did,” says Casey. They required highly-skilled teams of expensive engineers, large divisions, and big-scale manufacture. “When you’re that big, it’s hard to act on anything” that changes the market, he notes. “Meanwhile, financially, people are expecting constant growth.”

Younger companies no longer look to the established, old style technology firms for their proprietary hardware, applications and services, he notes. Instead, they seek cheaper options, such as cloud-based services, from other smaller and younger companies.

The difficulties of the largest technology giants doesn’t mean there aren’t opportunities for a wide range of smaller companies and start-ups.

As always, they can aim for a successful niche, hope to become a large enterprise themselves, or look to be acquired. Many of the acquisitions are by the very big technology companies, as a form of buying in research and development teams and product areas, rather than investing in more costly in-house research and development, he notes. One of the reasons many big companies, such as Microsoft and Cisco, run incubators is to nurse those potential future acquisitions.

Some of the big companies also resort to buying growth through acquisitions, as Facebook has started to do, Casey says. But he sees such a strategy in relatively young companies as a potentially worrying sign.

“Facebook is essentially buying growth, which indicates they’re already running into problems with innovating,” he says.

However, few existing companies would dare to be cheerful, if they took to heart Chambers’s overall keynote theme.

“And of all the enterprise companies in this world, only a third of us will exist in a meaningful way in 25 years.”